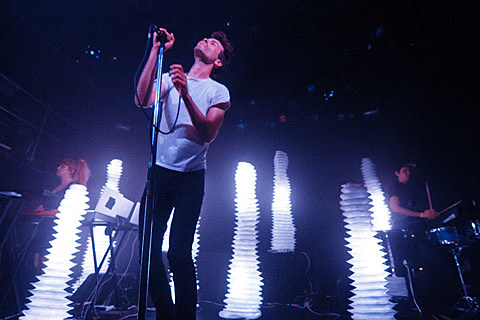 As mentioned, Glasslands is planning some cool shows for their final month. Among them is Toronto's Trust, who are now offically spelling their name TR/ST, on December 29. That show is with Klaus, SoftSpot, and a DJ set by Big Al. Tickets for that show go on sale today at 1 PM. TR/ST's last NYC visit was at Irving Plaza in September.

In addition to this and the Pains of Being Pure at Heart show on 11/24, some of the other just-announced Glasslands shows that all go on sale at 1 PM today include:

Waxahatchee, who play Asbury Lanes tonight, will play "in-the-round" Glasslands on December 10 with Steve Gunn, and the Goodbye Party (tickets).

Nils Frahm, who is playing St. Paul & St. Andrew Church on November 21, will play a "special set" at Glasslands on November 20 (tickets).

Com Truise, who just headlined Music Hall of Williamsburg, will play Glasslands on December 20 with Figgy and Nitemoves (tickets).

The Blow, who just finished up a residency at Union Pool, will play Glasslands on December 5 with Zambri (when was the last time they played?) and Cookies (tickets).