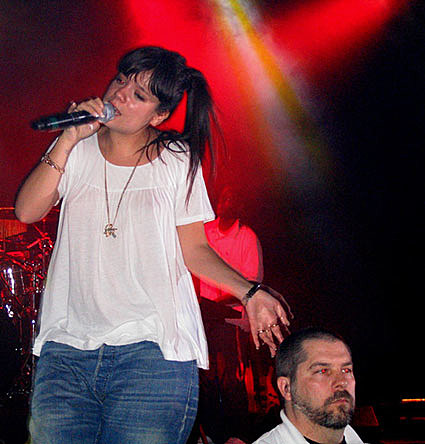 Lily Allen's next NYC show is at the Fillmore. Next she'll play the much larger Roseland Ballroom on May 30th. Tickets are on sale Saturday. More tour dates(and SXSW stuff) below (you backward americans)....

Chart Attack was at her Stubb's show (which I heard some of from over the wall):

Stubb's is an outdoor venue that holds more than 1,000 people, and it was packed. I got to about 10 metres in front of the stage, right in the middle, so was happy with my vantage point as I sipped my Lone Star and waited for Allen's arrival. The wait was 15 minutes longer than it should have been, but she arrived on stage with a Budweiser in one hand and a cigarette (which wouldn't be her last of the night) in the other as she opened with "LDN" and instantly had the crowd singing along. Her music has a much stronger reggae vibe live and, while Alright, Still was one of my favourite albums of last year, I'm a reggae-head so I was cool with that. There were drums, bass and keyboards, but no guitar. But the trumpet, trombone and saxophone added a lot.

"I'm a little bit drunk because it's 11 o'clock and I've been drinking most of the day," Allen said while giggling, before launching into a tirade against NME. "Fuck off you cunts," she said of the British music tabloid, before adding that its editor had the smallest penis in the world. She stated that she had just learned that day that NME was sponsoring the show and that she would have pulled out if she had found out sooner.

"Everything's Just Wonderful" was next, followed by "Friday Night," which had fans skanking. She said that she was bored with "Smile," but would try to get enthused for it because it was her first performance in Texas. She showed off more of her singing talent on the U.K. chart-topper and the next song, "Alfie," before thanking the crowd and walking off the stage. The 25-minute set was too short, but it was the highlight of the night. It seemed that was the case with a lot of people, as there was a large exodus before Razorlight's set. Including me.