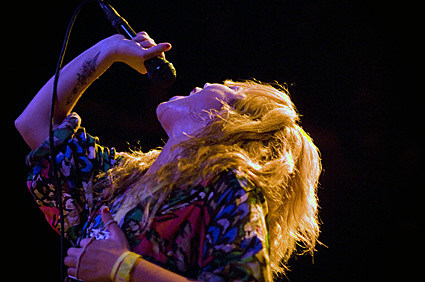 Back in June, we mentioned that the Mad Decent Block Parties were returning this summer and then earlier this month, they revealed a list of artists, but didn't say who was playing each city. Now venues have been revealed for all five parties and the lineups for NYC Philly, and Toronto have been announced as well. The FREE NYC party will happen on August 5 at WIlliamsburg Park (in previous years it was at the South Street Seaport) with Major Lazer, Erol Alkan, Bonde Do Role, Lunice, Riff Raff, Mr Muthafuckin' eXquire, Reptar, Zebra Katz, Bosco Delrey, Baauer, Kito, and Paul Devro. The parties are free and all ages but RSVP is required. All announced lineups are listed below.

Speaking of Lunice, his collaborative project with Hudson Mohawke, TNGHT (pronounced "tonight") released their self titled debut EP this week (7/24) via Warp/Lucky Me. If you've yet to hear it, you can stream the entire thing below.

As for Bonde Do Role, the block party will be their first NYC show quite a while. You may remember that their original singer, Marina Ribatski left the band in 2007 and was replaced by two other singers, Ana Bernardino and Laura Taylor, who joined the band by winning an audition done with MTV Brasil. Ana has since left the band too and they are now a 3-piece fronted only by Laura Taylor. The new incarnation of the band put out their first album in five years, Tropical/Bacanal, last month via Mad Decent. The album was co-produced by Diplo and Filip Nikolic of Poolside (who have two NYC shows this week). The album features guest appearances from Caetano Veloso, Das Racist, Cecile, Rizzle Kicks, and The Death Set (who also has a NYC show coming up). The video for album track "Kilo" and a stream of another track, "Bang," which features Kool AD of Das Racist, are below.

Updated Mad Decent Block Parties info, the flier for the NYC party, video and streams are below.