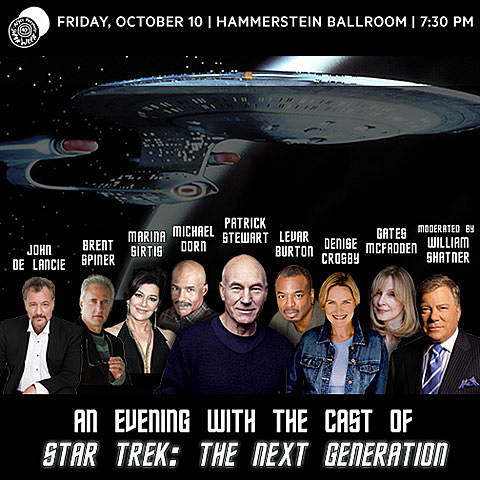 NY Super Week, the lead-up to NY Comic Con, is almost upon us, running from October 3 - 12 at places all over NYC. Since we last posted about it they've added a LOT more events. Among them:

--Cast Of Star Trek: The Next Generation Moderated By William Shatner at Hammerstein Ballroom on October 10 (tickets): Jean-Luc, Geordie, Data, Q, Troi, Dr. Crusher...pretty much everyone except Whoopie Goldberg and Will Wheaton.

--"Ask Me Another" at 92 Y on October 10 (tickets). The popular WNYC show (a mix of gameshow, music and comedy) tapes live with special guest Neil Gaiman.

--The Karate Kid 30th Anniversary Cast Conversation and Screening at 92 Y on October 11 (tickets). Has it really been 30 years since The Karate Kid? Join Ralph Macchio, William Zabka ("Sweep the Leg" Johnny), and Martin Kove (Sensei Jon Kreese) as they talk about the making of the film after a screening.