Fergus & Geronimo at BV-SXSW in March (more by Amanda Hatfield) 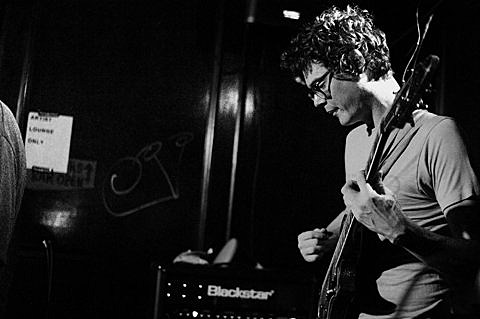 Happy New Year's Eve Eve! We've already given you a list of concerts and parties happening tomorrow and followed that with even more things to do. Some are already sold out (like 285 Kent and Glasslands). Some still have tickets (like Deer Tick). Here we are yet again with some more options.

Fergus & Geronimo are playing The Gutter (12/31) in Brooklyn with NT, My Teenage Stride, and The City Streets. Fergus will reportedly be "headlining at midnight" and "debuting tons of songs from their FUNKY new album." Brooklyn's NT are working on a new record and they've got a new song from it up for free download on bandcamp called "Reflection."

Superhuman Happiness are DJing at Union Pool (12/31) with DJ Partypants and visuals by BAMiAM.tv. As Superhuman Happiness point out on facebook, this is a DJ set and will be a very different show than their live set at Cake Shop TONIGHT (12/30). Tonight's post-Phish late show is a Dog Gone Blog presented show that features special guest Colin Stetson and DJ sets by Dog Gone Blog, Unicorn Pudding, and like tomorrow's Union Pool show, visuals by BAMiAM.tv.

Rub associate Nick Catchdubs is also DJing a New Year's Eve event in Brooklyn, at the Built by MeanRed party at Loreley (12/31) with Jubilee and a surprise guest. Tickets are available.

The Rub will also DJ at Brooklyn Bowl on January 15 for The Freedom Party vs. The Rub. Tickets are on sale.