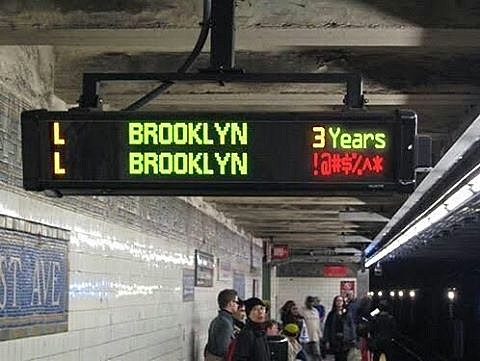 Since the news broke that the L Train's Canarsie Tunnel, which connects Manhattan to Brooklyn, could be shut down for years for repairs, folks have been wondering what this will really mean for commuters, business owners and residents who rely on the L every day. Well, the data company CartoDB have released some maps that are able to visualize what the transit situation will look like and, surprise, it doesn't look great. Via DNAInfo:

It would take 1,154 bus trips a day with departures every 1.5 minutes if the MTA is to come anywhere close to offering a reasonable alternative to the subway line, according to maps released by data company CartoDB.

They show that if the Canarsie tube is shut down for repairs -- an option being considered by the MTA -- the fastest a shuttle bus would be able to get from Bedford Ave., the last stop in Brooklyn, into Manhattan is under 20 minutes.

The research found that anyone living past the Grand Street stop -- the fourth Brooklyn station on the line -- would be better off using either the A train if they're near Broadway Junction or the M train at Myrtle Avenue than a shuttle bus.

"If there are shuttle buses, [the trip] isn't likely to be 20 minutes."

One of the maps, showing ease of access to alternate routes to manhattan, is below and there is a whole lot more dizzying detail over at CartoDB.

Unsurprisingly, business owners along the L line -- especially those near the now affluent Bedford Ave. stop in Williamsburg -- are upset. There was a Town Hall meeting last night (1/28) at Brooklyn Bowl, and Eater was there:

A large emphasis of the meeting, which was co-hosted by a slew of elected officials and local bar and restaurant owners, was the impact a potential shutdown would have on the economy. "The businesses, quite honestly, will shut down," says Carlo Scissura, president of the Brooklyn Chamber of Commerce. "The people will move out of this vibrant neighborhood." Like with previous L train shutdowns, the MTA will likely have contingency plans, such as increasing G and M train service, but more buses and ferries will not be enough to counteract the economic impact of no L train, some say. "Until we know that there are no other options, we shouldn't even entertain that option," one small business owner argued.

The people in the group organizing around the issue, called The L Train Coalition, say they will be moving future meetings further down Brooklyn to include people from across the L train, including commuters and residents. They'll be sending another letter to the MTA with requests for more information, in concert with many of Brooklyn's elected officials. The turnout for the event shows just how much people care about the issue, Rosen says. "People are going to fight for it," he says. "We're going to keep pushing."

If you're interested, the next meeting will be held on Wednesday, February 24, at the Swinging Sixties Senior Center (just off the Graham Ave stop) at 6:30 p.m.

The MTA suggested that one of the fastest ways to fix the L would be to close the Canarsie Tunnel completely, potentially replaced by shuttle bus services. Would that be realistic?

To answer that question, we used CartoDB to analyze the best option for riders given different bus coverage. Based on the location of the Williamsburg Bridge, we made the assumption that buses would originate at or close to the Lorimer stop in Williamsburg and end in the Lower East Side or Union Square in Manhattan. Using the Valhalla router again, we found that the fastest a person could get to Manhattan via this new bus line would be around 10 minutes without traffic. To get to any location on the L line in Manhattan would take closer to 20 minutes by bus.

If the shuttle bus takes 20 minutes, we are able to calculate the best choices for riders along the L needing to get to Manhattan. Should they go all the way to Lorimer and take the shuttle bus or should they transfer earlier at Myrtle-Wyckoff to the M train or at Broadway Junction to the A? The answer is shown in the map below. - [CartoDB]