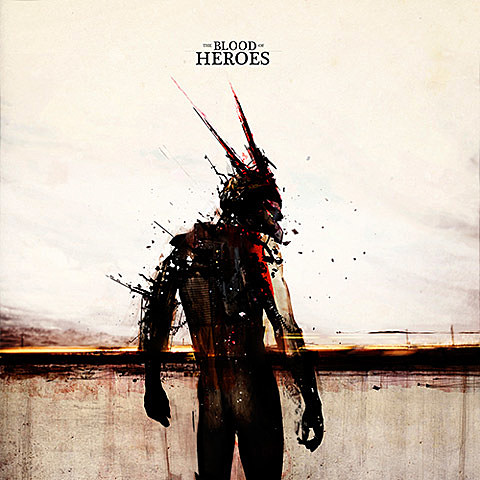 Back in April when I witnessed my heroes Godflesh at Irving Plaza, I ran into my old buddy Kurt Gluck aka Submerged aka the guy who runs OHM Resistance, a label that releases some of the most brilliant, unique, and challenging music in the world. That evening he told me he was throwing an epic OHM Resistance showcase on Saturday May 31, 2014 at St. Vitus in Greenpoint. Being the shit-for-brains procrastinator that I am, I obviously waited until the last minute to tell you about this epic night of harsh sounds and glorious volume. The evening will feature performances by The Blood of Heroes, Silent Killer, Invertia, SHVLFCE, and Katmai. From what I am told, there will be continuous music from the second doors open until the show ends. There will also be giveaways and shit loads of merch to be had including limited edition artwork. A handful of TICKETS are still available, and I urge you to take the plunge because an aural experience like this comes but once in a lifetime. We already mentioned this show, but now it's time for you to hear MY side of things.

I first mentioned The Blood of Heroes back in 2010 when I was talking about OHM Resistance artist Gator Bait Ten whose release "Harvester" is one of the greatest records I have ever heard. Gator Bait Ten and The Blood of Heroes share artists M. Gregor Filip and Submerged (Kurt Gluck), so I couldn't in all good conscience mention one artist with also mentioning the other, you know what I mean dude? Anyhow, The Blood of Heroes' self-titled debut was a collaboration project featuring Justin Broadrick (Godflesh, Jesu, Napalm Death) and Bill Laswell, with beats from Submerged and End.user and vocals from Dr. Israel. The album also featured live drumming from KJ Sawka and Balazs Pandi, as well as sound design from M. Gregor Filip.

The result was an assault of ear-mangling riffs, heavy ambiance, nightmarish soundscapes, and drum and bass exercises that simply liquified my brain. Their appearance on St. Vitus will literally be the very first live performance of The Blood of Heroes. Since their inception they've had very few bookings, all of which fell through. Two bookings and one festival (Glade 2010 UK) were cancelled altogether, and they had to pull out of an Unsound appearance due to Justin K. Broadrick's impending baby arrival. The St. Vitus line-up will feature Dr. Israel (voice), legend Bill Laswell (bass), Submerged (electronics / synthesizers), Matt Labozza (drums) and haZMat (analog electronics/circuits). St. Vitus is a phenomenal room to witness such a spectacle and it is probably one of the most highly anticipated shows in recent memory for me.

Another heavyweight on the bill is Silent Killer. Silent Killer is a fucking sonic menace with two big drum and bass albums on Ohm Resistance (Everyone Bleeds and Amongst Villains). Silent Killer (Sean Shah) reaches back to the primary sources of various electronic music genres to create and showcase his personal interpretations. His albums are more than eccentric beats, rhythm and sound design; they are "a window into the mechanical soul of man in the 21st century". In addition to his albums, Shah has been releasing several singles on vinyl with notable artists such as SCORN, Counterstrike, End.user, UFO!, KJ Sawka, DJ Hidden, Cooh, Gein, Munchi and Rex Riot. Silent Killer straddles a fine line between standard drum and bass and pure chaos; he creates aural violence that even people who don't dig drum and bass can rage to. He is going to shake that tiny room to it's very foundation and bury us all. It is gonna rule.

To add even more eclecticism to the bill, the showcase will also feature OHM artist Invertia. Invertia are an industrial black metal group from the Northeastern US. And like many other OHM artists, there is some overlap in personnel as Submerged (Kurt Gluck) is their bass player. Their second full length album Another Scheme of the Wicked recently dropped on the Ohm Resistance label and it's a masterpiece. It's like Thorns and Emperor rolled around in pig shit and beat each other to death. Truly brutal, staggeringly fast, and dirty as hell. Head over to their bandcamp and wallow in their noise. They got remixed by Justin Broadrick, Submerged and more which you can also hear there.

Also gracing the bill is SHVLFCE. SHVLFCE is a phenomenal visual artist who also dabbles in the DJ trade, hiding in the crushing, mechanized depths of Techstep, Drum and Bass, IDM and Hardcore. To get a glimpse of what to expect, head over to the SHVLFCE Soundcloud and get lost for an hour. I am beyond excited to hear this stuff live. It's going to be a bassy and spasmodic experience; your body won't know whether it should be dancing or kicking something.

And last, but certainly not least, another great selection for the showcase is Katmai. Katmai is very new to me, but on Kurt's urging I've been listening to him and really like what I hear. It's a bit of a departure from your normal OHM fare, which is actually quite refreshing and a wonderful inclusion to a very heavy-centric bill. Katmai is John Laslo who, according to Gluck, is "a Brooklyn guitar ambience performer. His show builds atmospheres using only the guitar. I saw this guy playing a coffee shop in Brooklyn and he's a really amazing one man show - I know how hard it is to pull that off and make it compelling, and John does it really really well, using only pedals and no computer." I am a sucker for this kind of stuff (I'm looking at you, Eluvium) and can't wait to hear it in a small room, amplified.

For a taste of the overall experinience, OHM Resistance has made a mix with the artists appearing at Saint Vitus and more. Download it above; tracklist and show flyer are below... 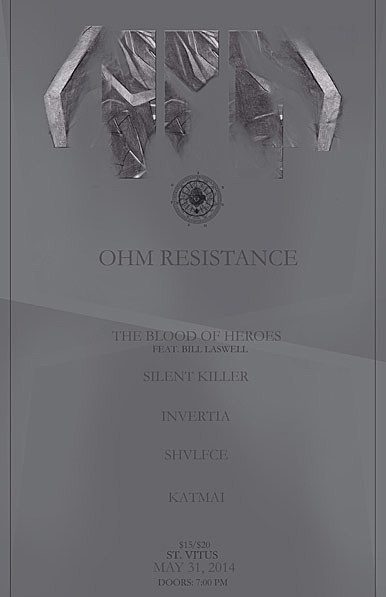