Outside Rough Trade back in November (more by Dana [distortion] Yavin) 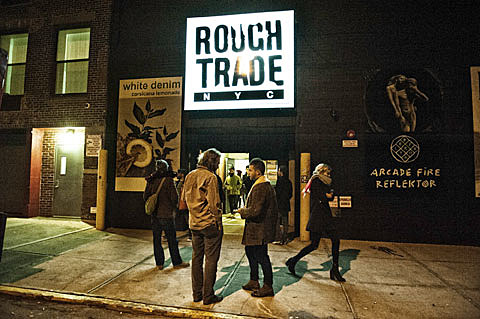 After being closed since the second week of operations to fix sound / noise issues, Rough Trade's concert venue looked ready to reopen this week with shows from Sylvan Esso on Thursday (1/30) and Eagulls on Friday (1/31). (Ghost of a Sabre Tooth Tigre's 1/29 show was cancelled.) Unfortunately it looks like Rough Trade is still not quite ready for prime time.

Friday's Eagulls show has been moved to Baby's All Right. The show is now a late show -- doors at midnight -- and The Teen Age are no longer on the bill, but Slonk Donkerson are still opening. Tickets are still available. UPDATE: It'll just be Eagulls. Mark McGuire of Emeralds plays at 11 PM.

Man Man and Xenia Rubinos on Saturday (2/1) has been moved to Music Hall of Williamsburg. Tickets are Still available.

UPDATE: The Total Slacker / Perfect Pussy show on February 12 is now going to be at Baby's All Right. Life Sized Maps and Honduras are also on the bill and tickets appear to be sold-out back on sale.

As for the Sylvan Esso show on Thursday, no word yet but if the two shows after are moving...stay tuned.

UPDATE: The Sylvan Esso show was moved to Baby's All Right.