Swearin' at Saint Vitus this week (more by Amanda Hatfield) 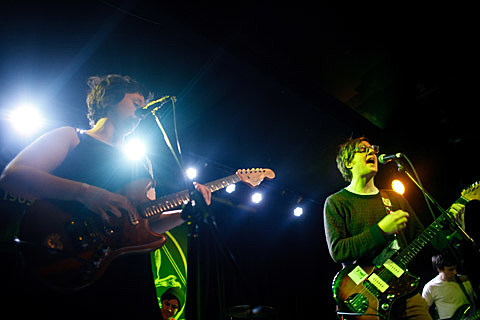 Looks like Rough Trade still needs a little more time to get their ducks in order, as two more upcoming shows have now moved to other venues. Swearin's show on March 7 with Even Hand and Certain Spiders will now happen at Music Hall of Williamsburg -- it's now an all-ages show and tickets are still available. Swearin' also play Cake Shop the night before (3/6) with Cassie Ramone (tickets).

The other move is Jungle's show on March 8 which will now happen at Knitting Factory (Wet are opening). While Knit is a bigger capacity venue, it's still being listed as sold-out (as is the Mercury Lounge show on 3/9).

The next show after those on Rough Trade's current schedule is The Damnwells on March 15 and that's sold out and staying put for now.