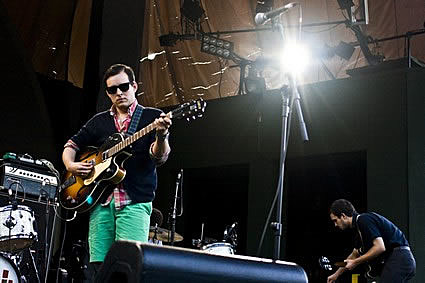 White Rabbits were en route to Cleveland last year when pianist Stephen Patterson received a call inviting the young Brooklyn septet to perform on The Late Show with David Letterman. "I completely freaked out," Patterson says. "I pulled off at a highway rest stop and we just ran around the van, calling our moms and dads."

Becoming elated over such news is more or less obligatory. Nellie McKay remembers "jumping in the air and doing a kind of flippery arm motion" upon being informed of her first Letterman booking; Spoon frontman Britt Daniel says he was "absolutely shocked" when told that Saturday Night Live had scheduled his band. But at the time of their Late Show invitation, White Rabbits were without a label apparatus, press clippings or even fans. "We got back in the van, drove to Cleveland and played a show for five people," Patterson says. When the day of the taping arrived, the musicians--whose vehicle had been stolen near their Bushwick home--hired a "man with a van" to drive them to the Ed Sullivan Theater. While waiting in the green room, they received another call, this time from their landlord. Their rent was overdue. [Time Out]