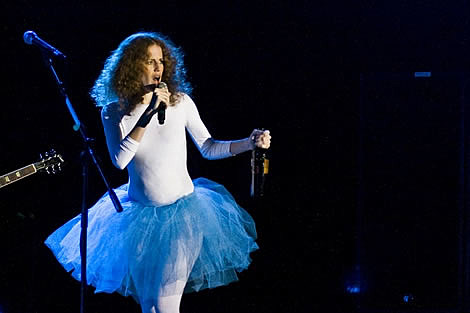 The lineup for tonight's Whiplash show at the NYC UCB Theatre is great as usual. Leo Allen hosts Paul F. Tompkins, John Mulaney, Andrea Rosen, Jesse Popp, and LA's Morgan Murphy. If anyone knows of any other shows Morgan is playing while she's in town, please leave details in the comments.

Also coming up at UCB: The Benson Interruption on Wednesday 2/18, and A-Side / B-Side with Kurt and Kristin on Thursday.

Patton Oswalt plays six shows at Caroline's this month. Tickets are on sale at Ticketweb.

Zach Galifianakis has a few shows coming up of note. On February 19th he'll join Bobby Tisdale, Pete Holmes, Shane Mauss and Andrea Rosen for a short set at 92YTribeca. Then on March 5th he's doing a full, $40, show at NYU. On May 24th he's playing the new comedy/dance tent at the Sasquatch Music Festval in Gorge, Washington.

Eugene Mirman recently celebrated the release of his book at the Bell House in Brooklyn. His upcoming shows include two dates with John Wesley Harding at Le Poisson Rouge.

Commercials have started to air for Parks and Recreations, by the people who brought you the Office, coming Thursdays to NBC and starring Amy Poehler, Rashida Jones, and Aziz Ansari. That commercial, and more videos, below...

Flight of the Conchords dates HERE.