The Morning Benders @ MHOW in April (more by Dominick Mastrangelo) 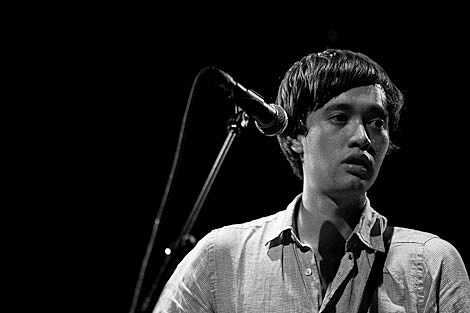 The free Yeasayer "Gone to Governors" show at Governors Island is soon! June 5th to be exact. Keepaway and Delicate Steve have been added as openers by the band. It will be the first of many free shows at "The Beach" this summer, only a few of which have been announced yet.

There will probably be a free show on June 12th (save the date), and there will definitely be a free one on Saturday, June 19th which will include sets by The Morning Benders and Freelance Whales (and one more band TBA).

Other announced shows in the free series are Neon Indian on August 14th, and She & Him on the 4th of July (a Sunday). Local Natives on August 7th (a Saturday) will be lumped in with the series, but it costs $10. More coming.

When I first posted about the "Gone to Governors" series, I compared it to Sunday's Jelly Pool Parties. In a way that's true, but not when it comes to show times. The Yeasayer and Neon Indian shows are 6pm doors, 8pm show (Pool Parties were always over by 7pm if I remember correctly). She & Him (on Independence Day) is a 4pm show.

Matinee NYC party for Pride 2010 is happening at the Beach on Governors Island Governors Island on June 26th ("The World's Hottest Party Comes to NYC for the First Time!"). That's a Saturday and it's a pay show, so no "Gone to Governors" on that day (Tickets go on sale at noon).

Rock the Bells NYC, set for August 28th, is another of the recently announced Governors Island shows, but that will be in a larger "venue" on the island (there are three main areas where shows can happen on the island - "The Beach" is where the free shows are).

Grizzly Bear, The Walkmen and Gang Gang Dance play a pay show at the Beach on Thursday, August 12th.

The Morning Benders are currently on tour with Broken Bells. Both bands come to NYC for a sold-out June 5th show at Irving Plaza. Their shows after that include Europe and a pair of SummerStage shows with the Black Keys in July.