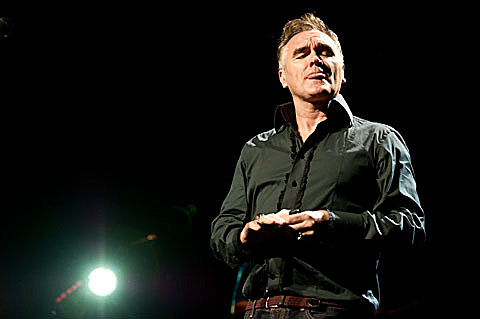 Morrissey has just announced a sizeable fall North American tour, including an NYC stop at Radio City Music Hall on October 10. No word on an on-sale date yet but you can keep checking Ticketmaster. All tour dates are with Kristeen Young (who is back on good terms with Moz we gather) and are listed below.

There's been a lot of news about the former Smiths singer who turned 53 last month. NME has publicly appologized for a 2007 article which Moz claimed portrayed him as a racist. (Claims that have dogged the singer since "Bengali in Platforms" on his solo debut Viva Hate.) Morrissey had filed a libel suit against the UK music weekly that was to have gone to court this summer, but has been dropped after NME published the following statement:

NME is pleased that it has buried the hatchet with Morrissey in respect of the libel case he brought against us in 2007.

Morrissey sued over an article based on interviews with him which he believed accused him of racism.
After an ongoing dialogue with Morrissey and his representatives, NME today publishes a clarification in the magazine and online which makes it clear that we do not believe we ever called Morrissey a racist and nor do we believe he is.

We have said sorry to Morrissey for any misunderstanding that may have arisen.
The settlement with Morrissey does not involve payment of any damages or legal costs (other than a small sum of costs which the court ordered NME to pay last year when we applied unsuccessfully to have the case struck out on grounds of delay).

In other news, via Moz zine True to You, Morrissey has refuted/clarified a published interview with JuiceOnline where Moz supposedly said he still planned to retire at age 55:

Morrissey would like to stress that reports of his 'retirement', as excitably earmarked by several newspapers and websites are "wishful thinking" on behalf of the writers.

There's still no news, however, in the areas most fans are interested in -- a new record or label. In another recent missive to True to You, he revealed, "We are no closer to port where record label interest is concerned. I promised I would never mention this again. But I just have." In the same update he also said that he's in need of a new drummer:

Our little covered wagon has lost drummer Matt Walker, who was eager to bring his term to an end. No bargainings could persuade him to stay, and his interest drew its last breath at Stockton. Behind the kit, Matt was a greyhound unleashed, and his great work on Years of refusal will always and forever speak up in his favor. His exit is sad, but he had no wish to continue, and a branch falls away.

As live dates begin July 5 in Belgium we imagine the chair has already been filled.

All Morrissey tour dates are listed below.