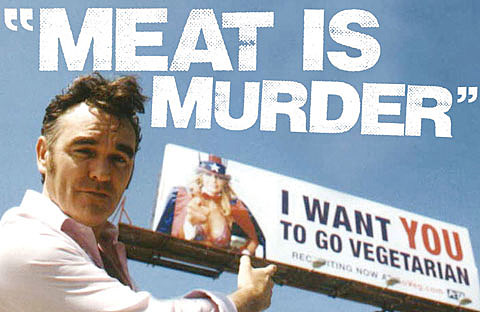 In an interview with Herald Sun (via FACT), Morrissey claims that Coachella offered to go "100% vegetarian" if he would reunite with Johnny Marr and headline the festival as The Smiths:

At Coachella a few years you complained about the waft of burning flesh from a nearby barbeque. Has that been a problem since at outdoor shows?

Not at all, and interestingly the agents for Coachella offered a 100-per-cent vegetarian event for the following year if I would agree to headline with Johnny Marr as the Smiths. Fascinatingly they made it clear that they would 'not require' the Smiths' bass player or drummer ... which I thought certainly said something.

The Moz always has to get in a little barb at Smiths rhythm section Mike Joyce and Andy Rourke, doesn't he? For more on the Smiths, you can pick up the October issue of MOJO which details the band's formation. And of course Morrissey will be in NYC next week for three sold out shows on his upcoming tour.