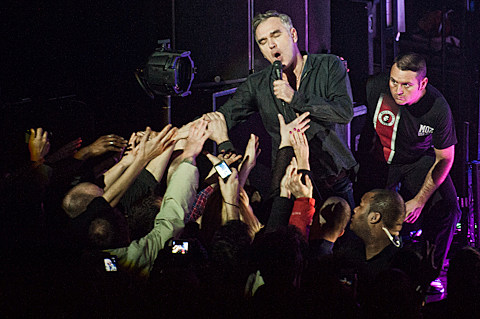 While Morrissey can't seem to get a record company to sign him (Amanda Palmer has volunteered to help him self-release), he does have a movie deal. Concert film Morrissey 25: Live at Hollywood High will hit theaters in U.S. and Mexico this August documents his March 2013 performance at the LA venue. After its short theatrical run, it will hit DVD in time for the holiday season. Tracklist is below.

Meanwhile, after a tour plagued by ill health and cancelations, Moz is on the mend and set to return to the stage. No North American shows have been announced, but he'll be in South America next month for a series of dates, all of which are listed below.

Morrissey 25: Live at Hollywood High: setlist:
"Alma Matters"
"Ouija Board, Ouija Board"
"Irish Blood, English Heart"
"You Have Killed Me"
"November Spawned a Monster"
"Maladjusted"
"You're The One for Me, Fatty"
"Still Ill"
"People Are the Same Everywhere"
"Speedway"
"That Joke Isn't Funny Anymore"
"To Give (The Reason I Live)"
"Meat Is Murder"
"Please, Please, Please Let Me Get What I Want"
"Action Is My Middle Name"
"Everyday Is Like Sunday"
"I'm Throwing My Arms Around Paris"
"Let Me Kiss You"
"The Boy With the Thorn in His Side"