Woe is he: Moz in Dallas (more by Tim Griffin) 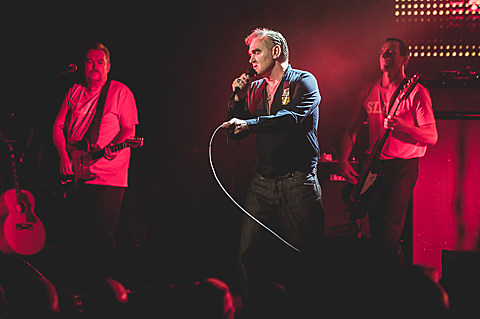 Morrissey sure has had an up-and-down year. He started 2014 off with a best-selling Autobiography under his belt, a new label (Capital-owned Harvest) and a new album on the way (World Peace is None of Your Business). Then came a wobbly start to his tour, the cancellation of that tour, fingerpointing, lawsuits and allegations, and now... he's been dropped by Harvest less than a month after the release of his new album which debuted at #2 in the UK and #14 in the US. Word comes, as usual, via Moz mouthpiece True to You:

Three weeks after the release of Morrissey's World Peace Is None Of Your Business (#2 UK, #14 US), Capitol Records/Harvest have ended their relationship with Morrissey, as directed by label boss Steve Barnett.

Morrissey is once again in search of a record label.

This comes just five days after a long, angry missive that Morrissey posted to True To You where he complained about Harvest being unwilling to make a video for the album's title track and the record industry in general:

We know that the number 1 position on the pop charts is "bought"; this is not 1955. Thank you to all of my friends in Israel, Chile, Sweden, Poland, Argentina, Hungary, Romania, Finland and Italy who bought World peace is none of your business. It is 30 years on since The Smiths album entered the UK chart at number 2 with zero airplay and zero promotion, and the struggle for the airwaves remains difficult. Yet, I am writing this to you now, and you are reading it.

In answer to many people who have asked, I should like to finally make it clear that I have not received any television invitations - worldwide! - to either discuss World peace is none of your business, or even to sing any songs from the album.

Anyone who's read Autobiography knows that, according to Morrissey, all chart failures are a result of record label mismanagement and not his fault, ever. Maybe its time to take Amanda Palmer up on her offer.