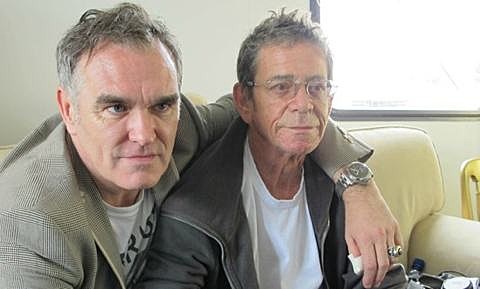 It should come as no surprise that Morrissey was a big Lou Reed fan. He was one of the many musicians to eulogize Reed, who died on Sunday, offering up some nice words via Moz mouthpiece True to You, quoting Irish poet Patrick McGill:

No words to express the sadness at the death of Lou Reed. He had been there all of my life. He will always be pressed to my heart. Thank God for those, like Lou, who move within their own laws, otherwise imagine how dull the world would be. I knew the Lou of recent years and he was always full of good heart. His music will outlive time itself.

We are all timebound, but today, with the loss of liberating Lou, life is a pigsty.

In other news, you may be aware that Morrissey's Autobiography came out a couple weeks ago in the UK via Penguin Classics, and became the fastest-selling artist memoir since online sales records began in 1998, besting Keith Richards' Life which was the previous record-holder. Autobiography has now secured US distribution through G.P. Putnam's Sons, an imprint of Penguin Random House. Sorry, Moz, you may have written the lyrics to the "Greatest Album of All Time" but you're not a "classic" in America. No release date has been set yet for the American release.

Reviews for Autobiography have been mixed. Saint Etienne's Bob Stanley (a former music journalist) reviewed the book for Faber Social:

"Anything is forgiven of anyone who makes us laugh" says Morrissey, quite aware of his own, often well-deployed, comic talent. Yet Autobiography feels as if it were written in two, or possibly three, different sittings, and the laughs come hard the longer it goes on. It's hard to believe that the man who sees the giddy daftness of accidentally starting an LA riot by singing You're the One For Me Fatty - "hardly an Altamont rallying cry to the social underbelly" - would expend any energy on trying to take down "little pinched Irish madam" Henry Kelly. Yes, that Henry Kelly, the one from Going For Gold and Classic FM. The schizophrenic nature of the book prevents it from being the classic he presumably thinks it is. - [Faber Social]

Someone once said "it takes strength to be gentle and kind." I picked up an import copy of the book but haven't had time to read it yet. Have you?