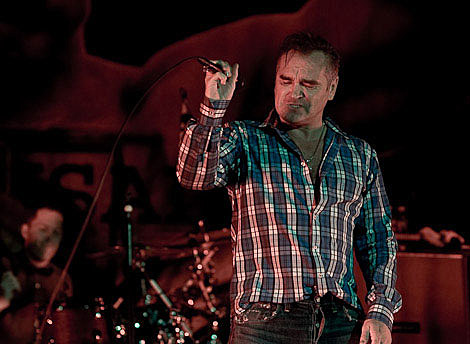 Billboard has a new interview with Morrissey where they ask him about that Ramones review he wrote as a kid. Morrissey says:

I came clean about this many years ago. When I bought the Ramones first album on import, I was enraged with jealousy because I felt they had booted the Dolls off the map. I was 100% wrong. Three days after writing that Ramones piece, I realized that my love for the Ramones would out-live time itself. And it shall. Well, it virtually has already. If the Ramones were alive today, they'd be the biggest band in the world. It takes the world 30 years to catch on, doesn't it? I mean, look at poor Nico. Every modern teenager now seems to love Nico, yet while she was alive she couldn't afford a decent mattress.

And about the Smiths:

The solo years have been more meaningful to the audiences than the Smiths years, but the press in England only write about me in relation to the Smiths era. This exhausts me. I wish the press were more willing to chronicle these recent tours and the most recent albums. But they won't do it. Their needle stuck at 'The Queen is Dead.' I've sold out large venues throughout five continents this year alone - with incredible reactions everywhere. Yet the press will only blather on about Smiths reunion rumors. You can well imagine the frustration. Thank God I have a strong chin.

Morrissey is now on tour and played Fallon last night.