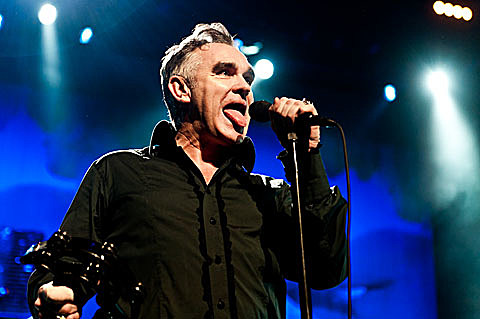 Surely it will surprise no one -- at least those even somewhat following along -- that Morrissey has more to say on his beef with Harvest Records and their lack of promotion of his new album, World Peace is None of Your Business. (For those who aren't and don't want to follow along, time to check out.) A lot more. He just posted a lengthy missive, titled "PLEASE CLOSE THE DOOR BEHIND ME," to TrueToYou.net explaining where he thinks the label failed him...as well as his claims that he never official signed to the label. Here we go:

In response to 77 million questions I can only say this much on the subject of the Harvest drama. It is quite true that Harvest initially appeared like a saintly beacon of light, and they instantly packed us off to France where we recorded World peace is none of your business. The universe was back in balance, and we all considered this to be the very best Morrissey recording ever, and even the boo-hoo-suck-it-off elements of the press appeared to want to agree. At last I am born.

It all seemed too good to be true. It was. I believed that the rich soil of the album had several strong hit singles. Frayed tempers began when Harvest arranged the 'spoken word' films, none of which gave any clue as to what World peace is none of your business intended to be, or is. The films were OK, but they went nowhere and stayed there.

With every nerve alert, we pushed the label for a proper video for Istanbul to precede the album, not least of all because a single ahead of the album release might inch the album to a higher chart position. The label backed off, even though Istanbul received 55 radio plays in just seven days on a major US station. Instead, the label requested a fifth spoken-word film, which naturally had me fumbling around for an axe: no independent thought required. The UK label, meanwhile, created a quite fantastic television advertisement to transmit during the week ahead of the album release. I could taste excitement once again. The TV ad never appeared and my hackles bristled as my bristles heckled. The label responded with frosty aloofness, and I suddenly realized that we were not, after all, of the same species. I ploughed into them insisting upon "proper band videos, where the band play and I sing" - an evidently confusing concept that required seven weeks of explanation, detailed graphs and several drawn up maps.

The rest of Morrissey's latest missive, along with an unofficial fan-made video for the album's title track, below...

The label suggested I come to Los Angeles and read passages from Autobiography in front of selected audiences. As frightening as that idea was, I hung on, desperate to believe that Harvest were not as cheap as they now looked. I hope to finish this statement whilst I'm still clean-shaven, so I will jump to the final curtain: during the weeks of the album release, the label were minus one single structural idea, and it appeared evident that each member of the team was acting in separate rooms without doors or windows. Mutual mistrust exploded between Harvest and I, and with fashionable pessimism, the label boss yawned and ordered the surface smartness of dropping World peace is none of your business three weeks after its release. There, now! This would not have happened to the Teletubbies.

Sorrily botched the project may now be, but it's worth it to get Morrissey out of our Inbox. Yes, I can be intensely persistent, and I certainly have an over-active fantasy-life, but the Harvest experience tells us that despite the blinding flash of teeth and smiles, it doesn't take much for the coin to flip and suddenly we're all compromised and shattered. All you need to do is disagree with the vanity of the label boss and your beheading will be slotted in between bottles of the most average champagne on the market. Just one weak-chinned drone can assert the fist of injustice and all of our efforts are flushed away. And thus ... they were.

I might be wrong, but I think World peace is none of your business will instantly disappear from iTunes and record stores and every download-upload-offload outlet on the planet, because Harvest technically have no right to sell it.

Most of the Harvest team are very nice, and I sincerely thank them for trying and caring so much - even if their promotional duties were fully undertaken by the Morrissey audience themselves, whose You Tube videos for World peace is none of your business fully provide the art that the label could not muster. The listeners instantly understood how entertainment could also be art.
Staggeringly, I still believe that there's a label out there with my name on it, and one that will issue World peace is none of your business, and afford it the respect it deserves.

Thanks for reading this (rashly assuming that you have), and thanks once again to the Harvesters who tried.

We are boot-camp ready for Lisbon in October, so with the will of many gods, hopefully at least 38 of you will turn up.