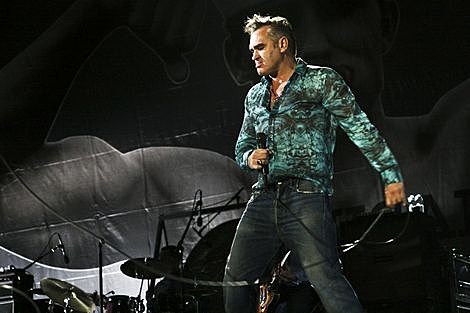 "Morrissey sustained hand and arm injuries recently after being attacked by a dog in England. Morrissey has attended hospital in Malmo (Sweden) where x-rays reveal a fractured index finger on his right hand. The cracked bone is at the tip of the finger.
The injury will not affect upcoming shows.
Morrissey is delighted with the news that tickets for the London Palladium sold out in five minutes."
[True To You, July 11, 2011]

On August 25th True To You reported that "Morrissey has been attending the Wellington Hospital in London for treatment for his right index finger, which remains broken. Morrissey was bitten by a dog in June." Today they announced the below tour...