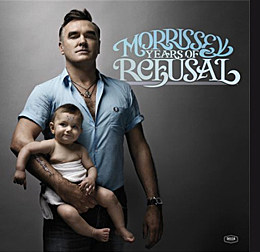 'I'm Throwing My Arms Around Paris' will be supported by two new songs 'Because Of My Poor Education' and 'Shame Is The Name', the latter featuring additional vocals by Chrissie Hynde.

Morrissey-solo.com is reporting a rumored NYC show at Carnegie Hall on March 26th with Eli 'Paperyboy' Reed. Whether that info is exactly correct or not, it is true that Morrissey is touring the U.S. in March. Tickets for a few dates are already listed at Ticketmaster.

Chrissie Hynde also has some upcoming shows scheduled. All known Morrissey dates below...