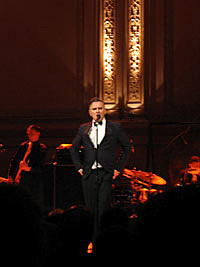 "First I have to begin by saying that when Morrissey brought his baby Sebastien on stage, and holding him, it was the highlight of the night. Several months ago, I actually wrote on here, the board, that I wanted that. Soooo it was like a guardian angel read it. And I got it. The baby got so big. He is so big now and so much cuter than you, you can imagine. He is even more cute now than on the cover of YOR. Morrissey is so blessed to have his baby, and now I am.

Getting back to the show, Morrissey came out in a tuxedo. Stunning! Boz -- gorgeous. Jesse -- hot, etc., etc. Too many lyrical changes to mention. Ones above obviously. Oh yes, Morrissey asked Who am I? I'll try to remember them, this is hard, because for some reason, I am seeing me all over the place.
Right -- too much codeine, wine, everything. Haaaaa Morrissey was saying that there were certain people that should be in their graves, something like there were certain people that he thought should be in graves. I wanted to tell him, right there that you know who should be. Won't mention any names, but you all know. Hint -- they wreck instruments. Morrissey also used the word died. He said also that the band got beaten up, that they were all beat up. Like they were broken down. No, he said beaten up. Another comment was that he was saying, listing out loud people who played at Carnegie Hall. He also said something like none of you know this song, none of you heard of this person.

I thought being at Carnegie Hall would be a completely different experience. It wasn't. Anyways, Morrissey was absolutely outstanding, mind blowing when he sang the unexpected Mama, and the other perfect Carol. 1975, 75, 75, 7500. Dial a cliché.
Tuxedo, blue shirt, pink shirt. Jesse was amazing and hot. Boz was awesome and hot. Morrissey -- the most handsome Dad, mesmerizing, holding his beautiful baby. Above and beyond stunning.

Morrissey's voice was impeccable. Millions of handshakes, giving the microphone and responding to comments that did not particularly interest him. And who could blame him really. The world is full of crashing bores. He also said that. He insinuated that the people that attended that little tiny place where they were packed like sardines, that the fans were from planet KooKooo. He insinuated, in a matter of speaking. It is hard for me to remember everything word for word., I can't even remember what I did yesterday.

Comparing Carnegie to that other place. Right -- Morrissey proved that he can be with whoever he wants. I suspect this is because -- he is -- Morrissey I trust him. I, I trust him. Don't jump to the wrong conclusions. My analysis for the night -- he doesn't listen to anybody. I talked to him directed at how big Sebastien got. Sebastien is getting more cute. The baby is so big now compared to on YOR. I mean let's face it, you can't keep avoiding the truth. His son, a beautiful baby boy. I was just too jittery and sweaty to tell him what I wanted to. I'm just glad I got to talk to them. I have a lot on my mind, but when Morrissey said that he was thinking certain people should be in their graves, I only thought that about the one who wrecks bands, because, because he has done evil and despicable things to Morrissey. I won't mention the other people in my life, person, I mean. Because, because this was Morrissey's night, and Boz and Jesse. Their show. Their performance.
It was huge. I am so proud of him. I am so proud of Morrissey.

Thank You and Good Night. " [Kate2828 on the Morrissey board]

Morrissey and openers The Courteeners played the above-referenced show at Carnegie Hall on Thursday night (3/26). It was the end of a 3-night NYC run that also included shows at Webster Hall and Bowery Ballroom.

The Courteeners also played their own show at Mercury Lounge on March 17th, and they will do so again tonight, March 28th at Tribeca Grand Hotel. The GBH-promoted event is free with RSVP. Morrissey's Carnegie Hall setlist below...

Morrissey @ Carnegie Hall - setlist
This Charming Man
Black Cloud
When Last I Spoke To Carol
How Soon Is Now?
Irish Blood, English Heart
Let Me Kiss You
I'm Throwing My Arms Around Paris
How Can Anybody Possibly Know How I Feel?
Seasick, Yet Still Docked
The Loop
I Keep Mine Hidden
The World Is Full Of Crashing Bores
Ask
Best Friend On The Payroll
Mama Lay Softly On The Riverbed
One Day Goodbye Will Be Farewell
Death Of A Disco Dancer
Sorry Doesn't Help
Something Is Squeezing My Skull
I'm OK By Myself

encore:
First Of The Gang To Die