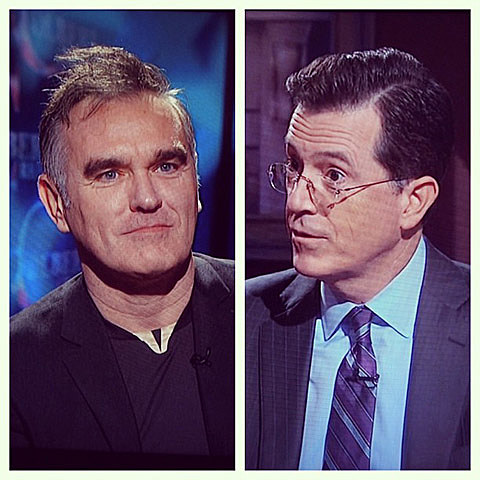 It was a tale of two Stephens: Morrissey was interviewed and performed on The Colbert Report last night. As per Moz's request, the building was meat-free for the day of his visit. While the interview is only just over five minutes, there was plenty of banter between the crooner and comedian. Morrissey rarely gives anything but e-mail interviews these days, so this was a treat, and some of the more Moz-able / memorable moments are below.

On the consumption of meat:

On why he doesn't feel the need to reunite with Johnny Marr and The Smiths:

Colbert seized the moment and may have given Morrissey a bit of a fright,"Well, I hate to tell ya - please welcome, Johnny Marr... Johnny?", as he gestured to the side of the stage. Johnny wasn't there, but that didn't stop a slightly nervous Moz from taking a tense glance over his shoulder.

Check out the interview and live performances of new song "People Are The Same Everywhere" and Years of Refusal's "I'm Throwing My Arms Around Paris" below. As you may know, Morrissey starts his three-night NYC visit tonight (10/10) with his Radio City Music Hall performance followed by two stops at Terminal 5 (10/12, 10/13), all of which are sold out.

"People Are the Same Everywhere"

"I'm Throwing My Arms Around Paris"