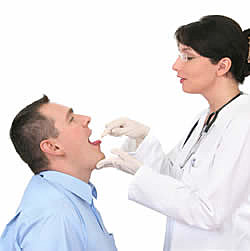 Following last night's performance at the Wolf Trap in Vienna, Virginia Morrissey was seen by an ear, nose and throat specialist this morning in Washington, DC. The doctor confirmed that Morrissey was still suffering from a viral infection that had caused the postponement of several shows last week and that his throat had not healed. As a result he has ordered that Morrissey not sing again before the 7th of July at the earliest. Consequently in addition to tonight's show in Baltimore the scheduled concerts in Atlantic City at The Borgata on the 5th of July and Holmdel, New Jersey at PNC Arts Center on the 6th of July have been postponed. An announcement will be made as soon as possible as to whether it is possible to reschedule any of these shows and in the meantime ticket holders should maintain possession of their tickets. The tour is scheduled to recommence in Boston on the 7th of July at Bank Of America Pavillion.