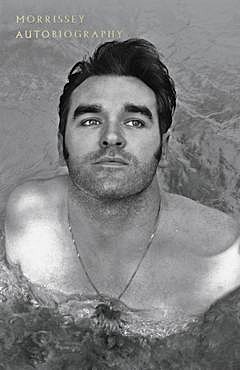 Morrissey's Autobiography was released this week in North America in hardback -- and the UK got a hardback version this week too (the original was a Penguin Classics paperback). That's the US and UK hardback covers above, respectively.

Morrissey will be in NYC this week for a book signing at Barnes & Noble Union Square this Thursday (12/12) at 7 PM. According to B&N, there's no reading or performance, just a straight signing, and "Your receipt for book = ticket!" This should be an interesting scene.

In related news, there have been unsubstantiated reports that the US and UK versions differ, and that some details about Moz's '90s relationship with Jake Owen Walters have been edited out. I bought the import a while back and that section is definitely one of Autobiography's most interesting, a rare glimpse inside a personal life Morrissey has successfully managed to keep personal until now. The first third of the book, detailing his life growing up a very poor Manchester, is probably the best part.

The latter half, though, spends a lot of time complaining about Rough Trade boss Geoff Travis and refuting -- line-by-line -- the ruling against Morrissey and Marr in the royalties lawsuit that Smiths drummer Mike Joyce won. There's also a lot of stuff like this:

Michael Stipe appears at Caroline Place, and we have tea in the back garden as the dunghill wafts of Queensway restaurants foul the air.

'Then why do you live here?' he asks.

'When I first heard Everyday is like Sunday I felt very jealous,' he goes on, and he explains how he, too, would like to go solo.

'I didn't ever want to go solo,' I say, 'I thought the Smiths would run for at least thirty albums.'

We walk through Hyde Park and then slowly across to Hammersmith. We enter the Hammersmith Odeon through the stage door, and six minutes later Michael walks onstage with REM. He is wearing the same clothes that he has worn all day, and he hasn't brushed his teeth.

Have you read it yet?