Morrissey live in Portugal this week (via @fiofania) 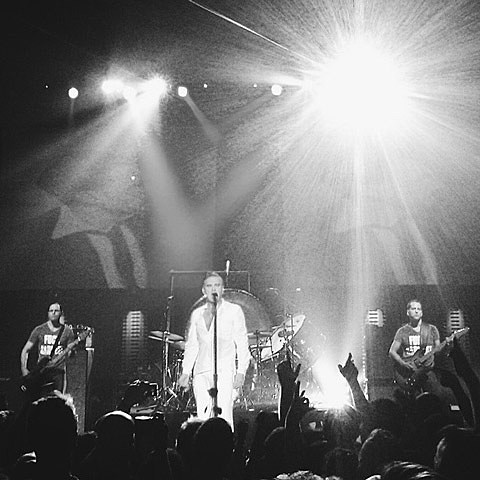 We know that Morrissey has not been well, causing several tour postponements and cancelations. In a just-published interview with Spanish newspaper El Mundo (via The Guardian), he reveals he has undergone treatment for cancer. Translated:

They have scraped cancerous tissues four times already, but whatever. "If I die, then I die. And if I don't, then I don't. Right now I feel good. I am aware that in some of my recent photos I look somewhat unhealthy, but that's what illness can do. I'm not going to worry about that, I'll rest when I'm dead.

No follow-up questions are asked, but his morbid sense of humor runs through the short Q&A, saying he is well past the age of making music ("Many composers of classical music died at age 34. And I'm still here, and nobody knows what to do with me"), and hopes to have his first novel published in 2015. "With luck I will be able to stop singing forever, which would make many people happy!" Feel better, Morrissey, our thoughts are with you.

Meanwhile, Morrissey has resumed touring, and is in Europe currently. His band are currently sporting "Fuck Harvest" t-shirts at show (as you can kinda see in the photo above), clearly a reference to disputes with his most recent record label. In other t-shirt news, one of the items currently at his merch table is a shirt that says "Be kind to animals or I'll kill you."