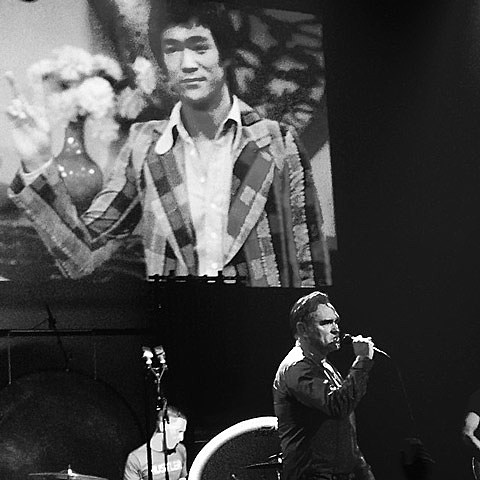 You may have already heard the title track to Morrissey's upcoming World Peace is None of Your Business and now you've got a second song to listen to till you get your mitts on the whole LP. "Istanbul" is a funky groover -- or as close as he gets to that -- and you can stream it via Spotify and watch the accompanying "spoken word" promo video (part of a series) below.

Judging from these two songs, Joe Chiccarelli's production seems a little more in sync with Morrissey's style than the blunt rock sound Jerry Finn brought to 2009's Years of Refusal. (Finn did better, or at least the material was better, on 2004's You Are the Quarry.) The sitars in "Istanbul" seem a little too on-the-nose given the lyrical content but otherwise there's some welcome space in the mix.

In other news, after all the excitement last week of "Morrissey is Tweeting" and the disappointment that "It wasn't actually Morrissey tweeting," Morrissey's verified Twitter account has now been deleted.

And in other news, Morrissey turns 55 on Thursday (5/22) and what better birthday present could there be than Miley Cyrus covering The Smiths' "There is a Light That Never Goes Out" live in Dublin, Ireland? (Maybe you remember this tweet?) Video of that is below if you want to watch.

As mentioned more than a few times, Morrissey's tour will be in NYC for a big show at Barclays Center on June 21 with Sir Cliff Richard and Kristeen Young (still tickets available).

Morrissey - "World Peace is None of Your Business"