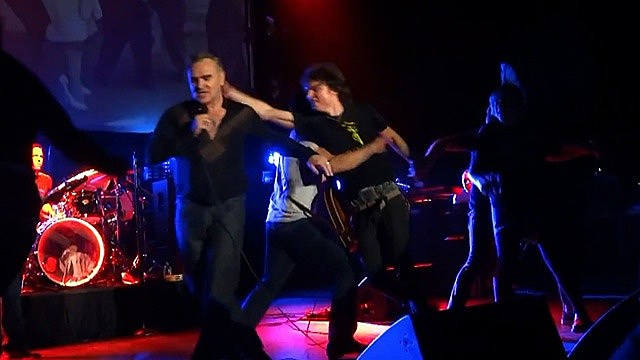 Morrissey's tour kicked off last night (5/7) in San Jose, CA. If you've ever been to a Morrissey concert, you know it is a never-ending stream of fans trying to rush the stage, hug him, rip off his shirt, whatever contact they can make. Unfortunately last night, the stage rush got out of control and the show was cut just a little short, notes Stereogum. TMZ, who has video of the incident says Moz was "attacked by a fan" and "knocked to the ground" though the footage doesn't really seem to bare that out. Nonetheless, stage security did seem to have a little more trouble keeping fans offstage than usual. You can watch the video below.

Before the violent hugging happened, Morrissey did play a few new songs that will be on his new album, Word Peace is None of Your Business, including the live debut of the title track, "The Bullfighter Dies," and "Earth is the Loneliest Planet." Setlist and video of those three new songs plus video of the stage rushing incident, below.

Meanwhile, tonight's show (5/8) at Santa Ana's The Observatory has its own problems, as the venue's smaller room, The Constellation Room, is supposed to host We Are Scientists and PAWS. But, according to PAWS, Morrissey doesn't want their show to happen and refuses to play until that show is canceled. From PAWS' Facebook:

Morrissey is currently trying to have our slot at tonights show in Santa Ana, California cancelled because he is playing in another room in the same venue and wishes for their to be no other artists performing in his vicinity.

This is an unbelievable act of complete and utter selfishness that should not be tolerated. This rich, has-been, ego maniac acting like a baby throwing toys from a pram. To satisfy his little power hungry brain. A complete disregard for others and a baffling lack of support/respect for young, hard working musicians.

People like this, with attitudes like this displays a classic example of why the music industry is still awash with disgusting garbage that should by now have been snuffed out. Pedestals, self righteous entitlement, disrespect and "competition". Geez. It's not like we've come all the way from Scotland to play for nothin'...

I'm just going to leave this photo and sentiment with you and we'll report back with developments. We won't go out without a fight!

What do you all think?

UPDATE: Both shows are happening, through compromise, says We Are Scientists via Twitter:

ANTA ANA! So everyone can play a full set, tonight's show will start after Moz's bedtime:

PAWS play Shea Stadium in Brooklyn later this month when the WaS tour is finished.

World Peace is None of Your Business

Earth is the Loneliest Planet of All

SETLIST: Morrissey, San Jose 5/7/2014
Hand in Glove
That's How People Grow Up
Ganglord
Speedway
I Have Forgiven Jesus
World Peace Is None Of Your Business (Live debut)
I'm Throwing My Arms Around Paris
Yes, I Am Blind
The Bullfighter Dies (Live debut)
Life Is a Pigsty
Everyday Is Like Sunday
Earth Is The Loneliest Planet (Live debut)
Trouble Loves Me
Meat Is Murder
First of the Gang to Die
The Youngest Was the Most Loved
I Know It's Gonna Happen Someday
The National Front Disco

Encore:
Asleep
One Day Goodbye Will Be Farewell