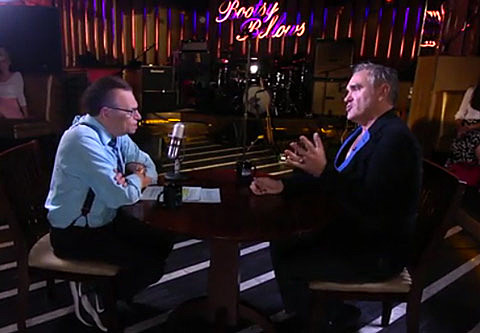 Morrissey was on Larry King Now, which was both as weird as that sounds but also less crazy than you might expect. Morrissey talked about the TSA "groping" incident, his being diagnosed with cancer, battling depression, the "brutal" music industry, the upcoming U.S. Presidential election and more. He also performed "Kiss Me a Lot" live. It was all very mannered. Watch clips below.

While it's uncertain if King had ever heard of Morrissey before that interview, it seems certain that Brit talk show host James Corden has, who had Moz on his CBS Late Late Show last night, to also perform "Kiss Me A Lot." Corden bowed before him at the end. Watch that below too.