Morrissey in Austin earlier this year (more by Tim Griffin) 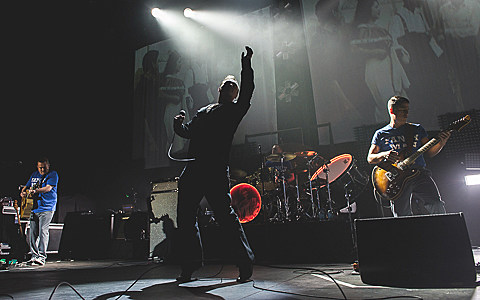 Morrissey has had quite the rollercoaster of a year: signing to a label, finally releasing a new album, saying he was never actually signed to that label, pulling his record from shops, canceled tours and some serious health problems. But, according to an interview given to a Serbian radio station B92 (he plays Serbia and Croatia this week), he's already got a new album's worth of songs written and hopes to record early in the new year. (Via Stereogum.) Releasing that album, well we'll see.

In other news, apparently UK network Channel 4 asked Morrissey to give an "alternative Christmas speech" that would be broadcast at the same time The Queen gives her annual one. Moz, who has quite a number of songs about his feelings towards The Queen, tells True to You that he declined the offer in the spirit of the season:

My view that the monarchy should be quietly dismantled for the good of England is reasonably well-known, but I don't think Christmas Day is quite the time to be trading slaps. The Queen should be allowed the impassioned trance of her annual address to the British people, if only to once again prove that, in her frozen posture, she has nothing to offer and nothing to say, and she has no place in modern Britain except as a figure of repression; no independent thought required. The Queen very well might be the most powerful woman in England, but she lacks the power to make herself loved, and the phony inflation of her family attacks all rational intellect.

All over the world highly civilized peoples exist without the automatic condescension of a 'royal' family. England can do the same, and will find more respect for doing so.

In double-related news, his old Smiths songwriting partner, Johnny Marr, had to cancel the remainder of his current North American tour (which hit NYC a couple weeks back) due to "serious close family illness." He added:

I'm really disappointed to not be able to play the shows. The touring has been so enjoyable for me and the band and the audiences have been great everywhere. If it was about just me being unwell I would've found a way to continue as I did when I broke my hand earlier in the year, but to not be there for one of my family is not right. Thank you to everyone for the kind messages. See you soon.

All canceled dates are listed below.