Morrissey in Dallas in May (more by Tim Griffin) 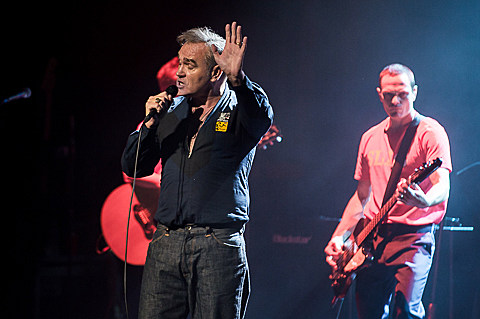 Remember how last week Morrissey said he was dropped by his label, Harvest Records? Well, apparently the label says that wasn't true. Billboard reports that "a source close to the situation" tells them Morrissey was not in fact dropped and he still owes them one more album to fulfill his contract. (Morrissey: "I Don't Owe You Anything.") Not a great year for Harvest Records.

In less confusing Smiths news, Johnny Marr has released the first single from his upcoming second solo album, Playland, which is due October 7 via Warner Bros. The song's called "Easy Money," and you can watch its video (dir. David Barnes), below.