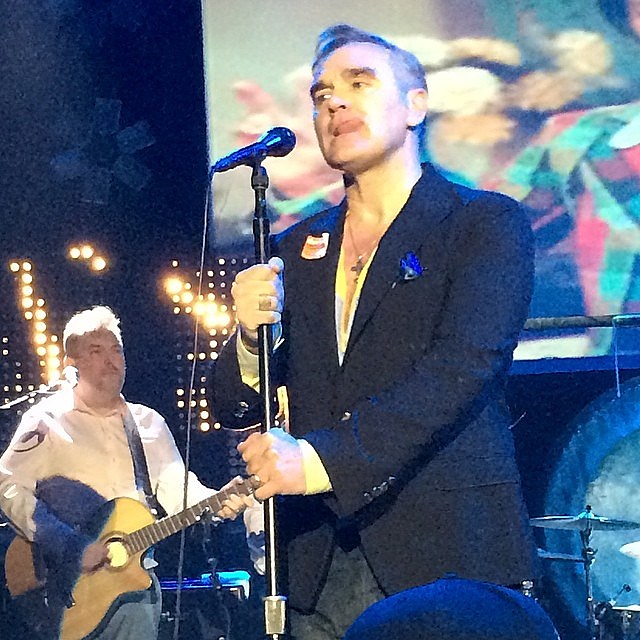 We haven't heard from Morrissey himself regarding the whole rigamarole over Thursday night's show at The Observatory in Santa Ana, CA (5/8) where the We Are Scientists / PAWS show at the adjacent The Constellation Room was nearly canceled but then pushed till after Moz's show ended. (We've heard plenty from PAWS and WAS.) Morrissey, via a publicist, however, has written in to Pitchfork, simply saying:

Morrissey had nothing to do with this. As long as there was no sound bleed, Morrissey was completely fine with another show going on inside the same complex."

As for Moz's show last night, it went off without any him being mauled by fans (too much). For this tour he's switched up some of his older songs, putting The Smiths' "Hand in Glove" back in rotation for the first time in 10 years, and he's also doing "Yes I Am Blind" (originally the b-side to "Ouija Board, Ouija Board"). You can check out his Observatory setlist below.

Morrissey comes to NYC at Barclays Center on June 21 with Sir Cliff Richard and Kristeen Young (still tickets available) and his new album, World Peace is None of Your Business, is out in July.

Video of "Hand in Glove" at The Observatory (and the setlist from that show and "Yes I Am Blind" in San Jose, CA) below...

Morrissey - Yes I Am Blind

SETLIST: Morrissey @ The Observatory, Santa Ana, CA 5/8/2018
Hand in Glove(The Smiths song)
Ganglord
The Youngest Was the Most Loved
I'm Throwing My Arms Around Paris
Speedway
World Peace Is None Of Your Business
That's How People Grow Up
Earth Is The Loneliest Planet
Life Is a Pigsty
The Bullfighter Dies
I Have Forgiven Jesus
Yes, I Am Blind
Everyday Is Like Sunday
Meat Is Murder (The Smiths)
Trouble Loves Me
First of the Gang to Die
I Know It's Gonna Happen Someday
The National Front Disco

Encore:
Asleep (The Smiths)
One Day Goodbye Will Be Farewell