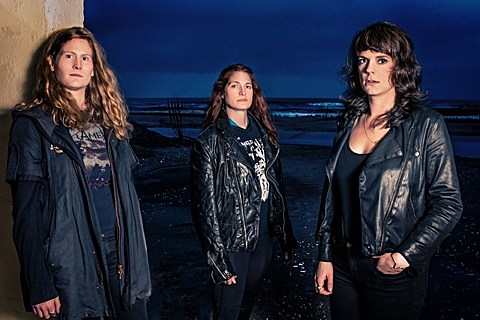 Sludgy chuggers Mortals have premiered a new song off their sophomore LP, Cursed to See the Future. The Brooklyn-based trio are releasing the album through new label home Relapse on July 8 (CD/LP preorder, digital preorder) and will then tour the United States and Canada.

"View from a Tower" continues in the path of Mortals' doomier fare, falling somewhere between slowmo crust, Entombed, and Celtic Frost's Morbid Tales. Guitarist Elizabeth Cline and bassist Lesley Wolf -- whose other band, Belus, put out a new song this week too -- construct an intimidating wall of distortion, while drummer Caryn Havlik punctuates every groove with a kick to the gut. The track's first half is deathly, viciously ripping through riffs, while the finale showcases Mortals' ability to build momentum a la High on Fire. Yet, this isn't imitation; it's Mortals and Mortals alone. Besides, they have their Slayer cover band Slaywhore for that kind of thing, anyway.

After a one-off date in Philadelphia with touring funeral doomers Lycus -- who will be appearing at Martyrdoom III with Evoken, Lord Mantis, and Mournful Congregation at Saint Vitus on July 1 (tickets) -- Mortals will kickoff their summer schedule in Brooklyn at The Acheron on July 18 with a record release show. (Ticket prices and final lineup TBA.) Then, the band will weave their way throughout the Eastern and Central US and Canada.