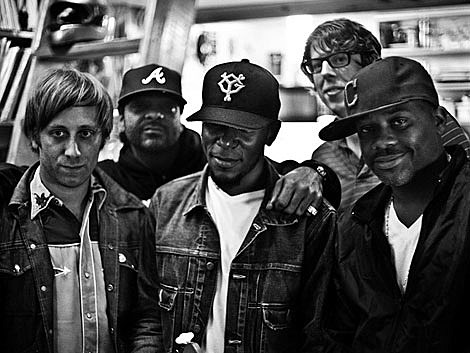 Just in time for the holidays and to remind the hip hop listmakers that The Ecstatic was/is the truth, the two-time Grammy nominated Mos Def has scheduled a show on 12/20 at Highline Ballroom. Tickets, though not cheap, are on sale.

Mos Def was also recently announced as a contributor to the new Gorillaz record, along with a host of notables

The third Gorillaz album will feature one newly announced GPS voice, two iconic frontmen of the '60s and '70s, and more, lending to a contributing line-up as eclectic as the one heard on 2005's Demon Days.
The GPS voice, Snoop Dogg, plus Lou Reed of The Velvet Underground and Barry Gibb of the Bee Gees, will be heard alongside Mos Def, Bobby Womack, The Horrors and the Syrian National Symphony Orchestra in Plastic Beach, out 2010.

Mos Def is also part of another notable crew, Blakroc, a project featuring The Black Keys as a backing band for a crew of killer MCs!

The Black Keys' Dan Auerbach and Patrick Carney have wanted to make a hip-hop album since they were teenagers....
"All the blues music I liked was super simple and stripped down. All the hip-hop I liked was super simple and stripped down," says Auerbach. "We always heard that connection."
The Black Keys' first demo reflected their hip-hop tastes. It featured drum loops and samples, which their first record label later told them to scrap. Years later, following recent praise for their minimalist, bluesy jams, The Black Keys have finally recorded a hip-hop album. Their collaborative ensemble is called BlakRoc.
"What makes this special is the guys' sensibility of hip-hop," [Pharoahe Monch] says. "The drum loop-like timing and patterns make a groove that is easy to rhyme to and to write over."-[NPR]

The self-titled, Damon Dash-presented BlakRoc LP is out now and also features Q-Tip, ODB, RZA, Raekwon, and Jim Jones among others.

Raekwon is on tour now and also has a NYC show coming up.

The Capo Jim Jones and Mos Def, along with the Black Keys, (BlakRoc) played Letterman last night (12/8) - the same night that Jawbox was burnin' Fallon to the ground. It was also rumored that the group might play a secret show at new venue Under 100 (in the basement of Damon Dash's building) later that night, but though Mos Def was there hanging out (again), he and the group didn't actually play (pictures from that event coming later).

Dig on the live Blakroc video from Letterman, the official video for the same song, as well as more videos from Mos, below...