Help me welcome Angry Citizen: Since Wes is too busyyyyyy to see live Hip Hop, and we're constantly jacking pictures from Angry Citizen anyway, we figured why not make it official..... 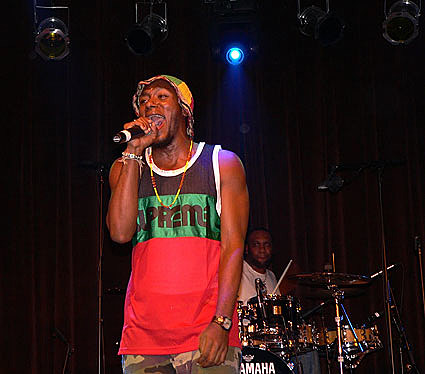 If you expected to hear Mos Def rip through 'Black on Both Sides', you left the Highline Ballroom disappointed, but if you did leave disappointed Saturday night, well, then you‘re officially excommunicated from the Mos Def community.

His performance was that kind of performance - provided you went in with an open mind, and permitted Mos and his band Black Radio the room to breathe, groove, and explore the different areas of funk and jazz that Mos has gravitated towards recently. Once their groove took hold, Mos Def rolled through inspired versions of 'Umi Says', 'Boogie Man Song' and 'Napoleon’s Dynamite'. He even threw in a batch of eclectic covers including a Stevie Wonder and Cyndi Lauper song, Bel Biv Devoe's 'Poison', and a portion of The Pharcyde’s 'Passing Me By'. The real fun and show stopper came when Mos brought out special guest, Q-Tip. Tip led the crowd through the chorus of 'Lyrics To Go' as well as 'Bonita Applebum' before jumping into 'Check the Rhime', with Mos picking up Phife’s lines. You on point Mos? All the time Tip!

Thx AC. And in related news, I guess Amy Winehouse is also already in town the country preparing for her appearance this Sunday June 3rd on the MTV Movie Awards because someone sent me this picture of her and Mos Def taping another show for MTV that will air on June 8th... 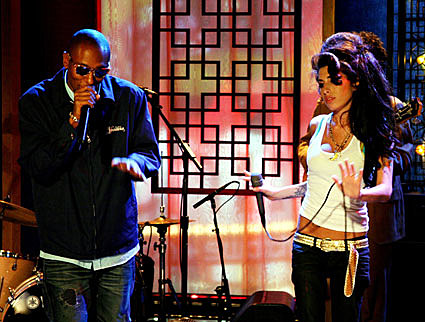 “45th At Night” transforms MTV’s famed TRL studio into a nighttime club where cameras take a back seat to the performance and live music thrives. The inaugural episode features Amy Winehouse backed by The Dap-Kings and includes a sizzling collaboration with Mos Def and premieres Friday, June 8th at 11:30pm on MTV. Songs performed include: 'Rehab', 'Back to Black', 'Me & Mr. Jones', & 'You Know I’m No Good'