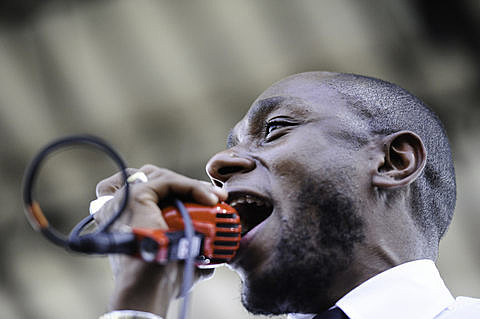 Like many, Mos Def, I mean Yasiin Bey, is none too happy with all this Barclays Center business taking over his hometown. Last week, he slammed the arena in a poem called "On center.stadium.status," which you can read in full below. Now, in an interview with Vulture, he explains the poem and his stance on the venue:

Yasiin Bey: I wrote that in New Orleans, on the day they were having the opening for Barclays. People were calling me and asking, "Are you gonna be there, are you gonna be there?" And it just kind of came to me, rather quickly. I have been what some people might call an opponent to the stadium. I think the word opponent has many meanings. I was concerned about what the stadium's presence in the community might do. I was concerned.

Yasiin Bey: I saw one thing that was kind of a telling sign. I was on DeKalb Avenue and Flatbush, probably two months ago, and at the intersection I saw these not-quite-so-young men, in standing traffic, trying to sell bootleg Rolling Stones T-shirts. [Laughs] I thought, "This is the trickle-down economic effect of Barclays in the neighborhood?" I didn't think of it as a positive.

In the interview, the emcee also made it clear that he didn't mean any of this as an attack on Jay-Z:

In the world of hip-hop and certain parts of the media, you take a statement and you turn it into Wrestlemania, you make the Himalayas out of molehills. I wasn't interested in that. I respect Jay. I have great respect for him. I'm a fan. I'm not a fan of everything [he does] but I don't think you have to be a fan of everything that someone does to have respect for them. And you know, I'm from the town too. I'm from the same neighborhood, the same projects. My grandmothers, my moms, my uncles -- my first five years in life were at Marcy Projects. If I can't have an opinion, who can? So to quote Jay: "I'm bigging up my borough. I'm big enough to do it."

Mos Def will be next door to Barclays Center in June for his show at BAM with Erykah Badu. Read his poem below...

Modzilla The spine winder
crooked
Face
Coliseum
Convenient future
Army base
They arrive in they best
Then it get worse
Dull scissors
Soft ribbon
Artery burst
Clear:
It's simpler to kill
A stranger
Than it is
To slay
A
Neighbor
DECREE!
HAIL THE NO NATION BEAST!!
whose shadow alone
buries homes
And swallows streets
Pass gas then
Pick its teeth
(ssssuuuucckkkk)
downwind
Topple the trees
Flat earth
Unavailable light
Bright screens
Zeroes on
Zeroes and zeroes
Round screams
What did Brutus tell Ceasar as he aired him out?
"Lord it's Hell in that crowd"
Stadium
Dig a grave
& build on top
digagrave
& build
On top
Emptyempty
FILL UP!!
Dig a grave
& thrill on
Top
digagrave
& kill on
Top
On center.
STADIUM.STATUS.
stadium.
Status.