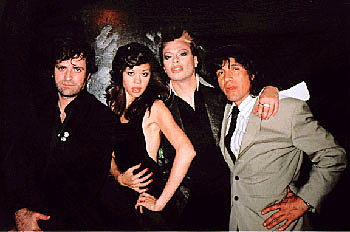 THE MOVIE: "Starting this month, filming will begin for a feature length documentary film of Motherf*cker that will directed by New York-based filmmaker and music video director David Casey. The project, simply titled Motherf*cker, will be a definitive encapsulation of all things Motherf*cker-music, sex, politics, dancing, fashion and of course, the artists, musicians, freaks and rebels who have made it New York City's most beautiful bastard child since 2000."

THE SOUNDTRACK: "With plans for an accompanying soundtrack and film score in the works, it's only a matter of time before the gospel of Motherf*cker is spread far and wide."

THE TOUR: "Casey and his production company, Great American Desert, will be organizing and producing a national Motherf*cker tour that will kick off in late 2006 and end at the 2007 South By Southwest Music Conference. The Motherf*cker tour, which will visit over 50 cities and college campuses across the country, will feature screenings of the film along with appearances by the Motherf*ckers themselves and live performances and DJ sets from the artists who have graced its stage over the years."

THE NEXT PARTY in honor of president's day features NY Dolls and Optimo.