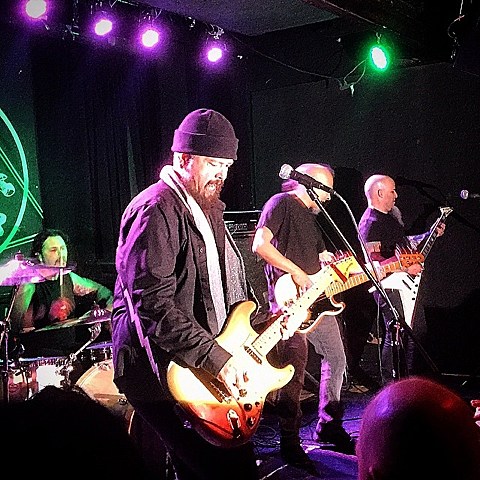 Motor Sister -- the new band of Mother Superior's Jim Wilson, Anthrax's Scott Ian, Scott's wife and Jim's past collaborator Pearl Aday, Joey Vera (briefly also of Anthrax), and John Tempesta (ex-Exodus, Testament, currently of The Cult) -- are just over a week away from releasing their debut album, Ride (due 3/10 via Metal Blade), and it's now streaming in full via AllMusic. Listen below.

Motor Sister were also just in NYC, playing Saint Vitus on February 12. Anyone go to that show? How were they? If you missed it, or just want to relive it, check out two videos from the show below.

Scott Ian wasn't the only '80s thrash veteran to play Vitus this month. Former Slayer drummer Dave Lombardo played on 2/23 with his band Philm. Philm's tour hits NYC again on Monday (3/2) at The Stone. Slayer without Lombardo is touring this year too, and Motor Sister drummer John Tempesta's two former bands Testament and Exodus are touring together. Exodus guitarist Gary Holt is also a current member of Slayer.

Motor Sister are also now labelmates with two former Megadeth members, Chris Broderick (guitar from 2008-2014) and Shawn Drover (drums from 2004-2014). The two recently teamed up with Henry Derek (ex-Scar The Martyr) on vocals and Matt Bachand (Shadows Fall) on bass to form the band Act of Defiance, who will have their debut album out on the label this summer. If you're at all curious what that might sound like, you can watch a teaser video below.

Meanwhile, if you were wondering what Dave Mustaine does for fun, why, he plays Metallica songs of course! Metallica also have dates coming up this year, including headlining Brazil's Rock In Rio which they were announced for this week. All of their dates are listed below.

And last but not least in '80s thrash news, Overkill have announced a big NYC show happening October 17 at Terminal 5 with two veteran power metal bands, Symphony X and Sanctuary (whose 1987 debut LP was produced by and featured Dave Mustaine). It's Overkill's only upcoming US date at the moment. Tickets go on sale Friday, March 6 at noon.