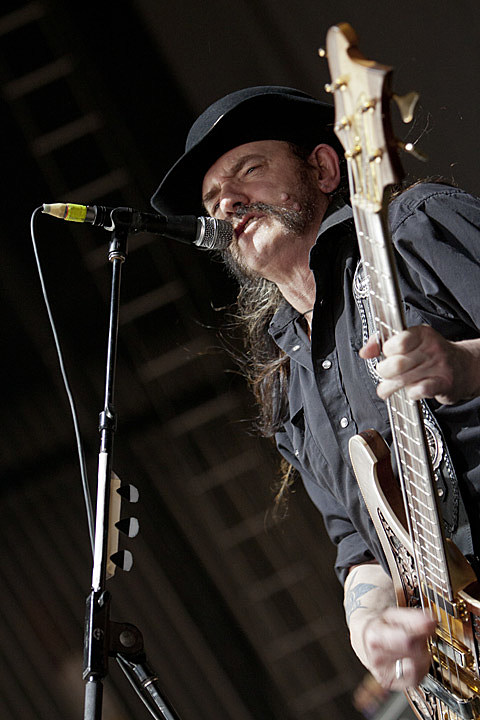 As previously mentioned, Motörhead had to cancel European tour dates this summer due to front man/legend Lemmy's flagging health. Despite the news that the mighty Lemmy had been laid low, Mötörhead were planning on being back on the road in full force this fall. Now, Motörhead has had to cancel scheduled fall dates due to Lemmy's ongoing struggles with his health. From Facebook:

I have to sadly let you know that Motörhead has had to postpone the forthcoming European tour until early next year, 2014.

We have made the decision because I am not quite ready to hit the road yet, and am working my way back to full fitness and rude health. Don't worry - I'm not about to start promoting veganism and alcohol-free beverages, but it is fair to say that I personally have been reconfiguring areas of my life to make sure I can come back fitter and stronger than ever.

It disappointed me tremendously to have to say I wasn't quite ready to hit the road yet, but not nearly as much as it would've disappointed me to go out, play some average shows and watch my health give way long before the tour was over! When people come to see a Motörhead tour, they expect a Motörhead show, and that is exactly what you will get as soon as I am fit and ready to rumble.

Your patience and understanding is appreciated...and know that I'm getting stronger and stronger every day, so watch out next spring Europe and we will see you then.

Here's to Lemmy getting back on his feet and in road condition soon. In more positive news, Motörhead released their 21st studio album, Aftershock, last week.

In similar news, the 2013 version of Sepultura also had to cancel their previously mentioned tour that was scheduled to hit Gramercy Theater on November 18. In a post on Facebook, the band said they were unable to get visas in time for the tour's kickoff on Friday.

Due to the delay in obtaining a visa for the band to enter the United States, we regret to inform all fans that the previously announced North American tour is being cancelled. We apologize to the fans, promoters, and the bands who were going to be part of the 'Tsunami Of Metal' tour - UNEARTH, KATAKLYSM, SCAR THE MARTYR, ANCIIENTS, and DARK SERMON.

Fans who purchased advanced tickets will be entitled to a full refund.

Sepultura had their 13th album, The Mediator Between Head And Hands Must Be The Heart, drop today (10/29)

In non-cancelation news, Morbid Angel, is scheduled to hit Irving Plaza on November 12. We'll be giving away tickets to that show tonight (10/29) on Invisible Oranges on East Village Radio. Listen in from 10 - 12PM EST on EastVillageRadio.com or on the EVR Mobile app for your chance to win a pair.