Mount Eerie at LPR in 2012 (more by Amanda Hatfield) 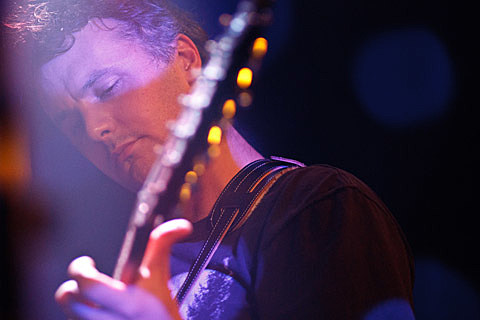 Mount Eerie doesn't have a full tour scheduled at the moment, but he'll be playing a couple festivals this year, as well as a NYC show on September 24 at Le Poisson Rouge. Tickets for that show are on sale now.

One of the fests is the Harvest Records 10th Anniversary in Asheville this August (lineup), and the other is this week's Unknown Music Series in Anacortes, WA. It takes place at various Washington venues, including The Unknown (where Mount Eerie plays), from Friday (7/18) through Sunday (7/20). The festival also features Bonnie 'Prince' Billy, Broken Water, Hive Dwellers, LAKE, O Paon, Mecca Normal, Lori Goldston (who was Nirvana's cellist), a performance of Blocks Recording Club co-founder Steve Kado's 2003 (which featured Owen Pallett), and more. In addition to Mount Eerie's performance, main member Phil Elverum will also be showcasing his art book Dust. Tickets, full lineup and more info at the festival's website.

Mount Eerie's last release was 2013's Pre-Human Ideas, "computerized demonstration versions recorded Nowhere by Phil Elverum between 2011 and 2013, plus 2 excerpted organs from other songs recorded at the UNKNOWN in Anacortes, Wash." Stream that, with a video of him playing a couple favorites from The Microphones' classic The Glow Pt. 2, below...