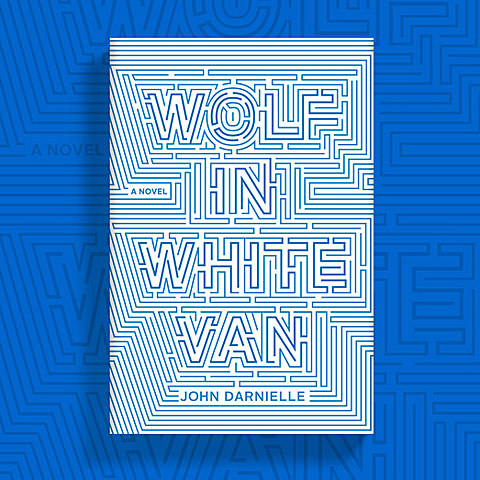 Mountain Goats main man John Darnielle has always been a storyteller, it's a wonder he's never written a book before now. Yet Wolf In White Van is his first novel. It's out on Tuesday (9/16) via Farrar, Straus and Giroux, and here's the synopsis:

Isolated by a disfiguring injury since the age of seventeen, Sean Phillips crafts imaginary worlds for strangers to play in. From his small apartment in southern California, he orchestrates fantastic adventures where possibilities, both dark and bright, open in the boundaries between the real and the imagined. As the creator of Trace Italian--a text-based, role-playing game played through the mail--Sean guides players from around the world through his intricately imagined terrain, which they navigate and explore, turn by turn, seeking sanctuary in a ravaged, savage future America.

Lance and Carrie are high school students from Florida, explorers of the Trace. But when they take their play into the real world, disaster strikes, and Sean is called to account for it. In the process, he is pulled back through time, tunneling toward the moment of his own self-inflicted departure from the world in which most people live.

You can listen to Darnielle read an excerpt from Wolf In White Van's audiobook below. You can also hear him read from it in person as Darnielle starts a book tour next week, starting in NYC on Monday (9/15) at Le Poisson Rouge with John Hodgman there to, presumably, coax anecdotes out of him. Doors are at 6:30 PM, it starts at 7:30 and it's free to attend. As for what to expect, here's John himself:

Dear anybody whose question "will there be a book tour?" I have seemed to ignore, please know that I was not ignoring you, but that there was a plan to tell people about the tour I'll be doing for Wolf In White Van. I am constitutionally predisposed to call this plan a dark and evil plan, but honestly I don't see how going places and reading from my book can really be thought of as dark and evil, though I will do my best...

...it seems probable that a number of people who like our music will also be interested in the book, but for purposes of clarity be advised that I am leaving my guitar at home for this one and will play no songs on this tour, though I can't promise that Mr. Hodgman and I won't do an a capella chorus or two of "Sing a Song About Love", or possibly "We Bite."

See you out there!

All John Darnielle book dates are listed, along with the audio excerpt stream, below...