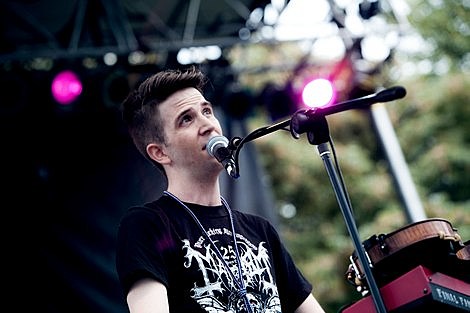 Final Fantasy played the Pitchfork Festival on July 18th, which is where the photos in this post are from (check out his Mayhem t-shirt). About a week later he played the Hillside Festival at Guelph Lake in Canada during a storm (probably not a good idea)...

A few songs into his bravura one-man baroque-pop set, the skies filled with thunder and lightning as rain began to drench Pallett, who continued shredding his bow fiercely across his violin.

As stagehands covered equipment with plastic, and organizers frantically tried to cut him off, Pallett kept playing the appropriately dramatic 'Lewis Takes His Shirt Off.' "One more minute," he yelled, as sheets of water hit him full force.

The stunned (and soaked) crowd broke into wild cheers as one minute turned into two and Pallett sped toward the song's big finish like a man possessed -- until the stage crew finally pulled the plug. Still, his heroics had already created Hillside's most memorable moment. [Spinner]

Video from that moment below.

This November he (Owen Pallett) heads out on tour to open up for The Mountain Goats (John Darnielle), who will be playing as a full band (though there is a much shorter string of Darnielle solo dates too). The trip ends with a pair of NYC gigs on December 1st and 2nd, when they respectively visit Webster Hall and the Bell House. Tickets for Webster Hall go on AmEx presale today at noon; general sale starts Friday, August 7th at noon. Bell House tickets are on sale today at noon.

The occasion for this tour is a new record from The Mountain Goats, enigmatically titled The Life of the World to Come, which comes out October 6th on 4AD. All song titles on the new album are Bible verses. John says,

The album was recorded between April and June: first at Electrical Audio with Brandon Eggleston; then at Sonic Ranch with John Congleton; and finally at Baucom Road with Scott Solter. Scott also mixed the entire album at Baucom Road. The band is still Jon Wurster, Peter Hughes, and me; Owen Pallett did string arrangements & played on the Electrical session.

I guess the obvious question is going to be: "John, have you had some sort of religious awakening?" and while I guess lots of people might want to be coy about answering that, that's never really been my style, so: no. It's not like that. It's not some heavy-narrative-distance deal either, though, and it's not a screed. It's twelve new songs: twelve hard lessons the Bible taught me, kind of. More than that I'd want to wait to say until some people have heard it, which won't be long.

One track "Genesis 3:23" is posted above. The verse in question there, "Therefore the LORD God sent him forth from the garden of Eden, to till the ground from whence he was taken," may aid in your listening. Album art & tracklist, with tour dates, the FF Hillside video, and FF@P4K pics, below... 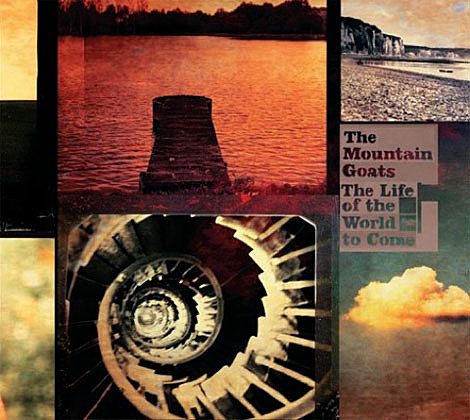 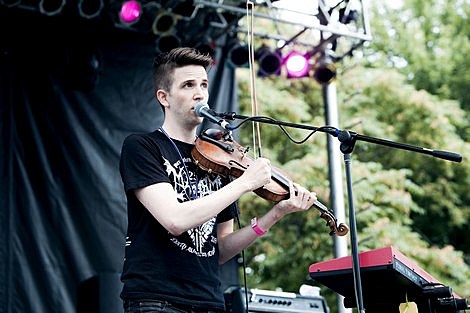 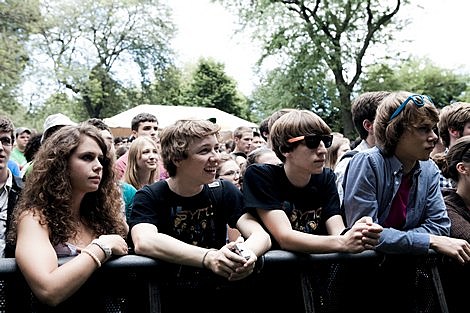 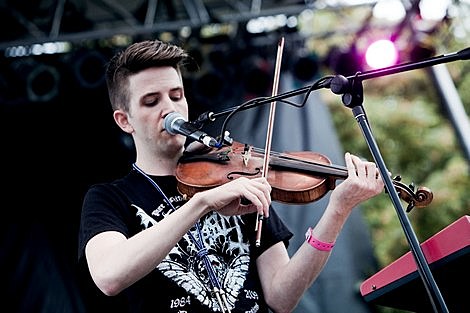 Final Fantasy playing in the storm at Hillside 2009

Rain blew sideways, lightning struck, and thunder boomed around us. Let me finish the song, Final Fantasy's Owen Pallet called, in between singing, as a big man from the stage crew stood beside him ready to shut things down. It was an epic moment at Hillside Festival 2009 at Guelph Lake.