Mountain Man at 92YTribeca in 2010 (more by Amanda Hatfield) 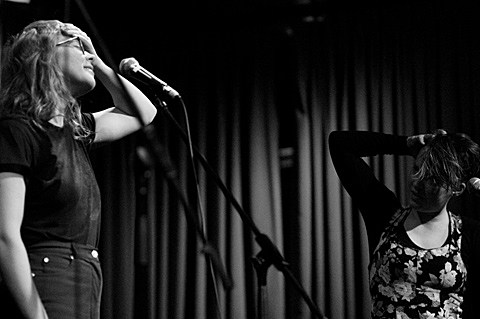 It's recently been announced that Feist is taking Molly Erin Sarle, Alexandra Sauser-Monnig and Amelia Randall Meath, aka the voices of folk trio Mountain Man, on tour with her this fall as her backup singers. That tour includes the previously announced show on November 2 at BAM Howard Gilman Opera House which is now sold out. That show is being opened by Feist's Arts & Crafts labelmate and fellow Broken Social Scene member Charles Spearin's The Happiness Project.

Last week, Feist and Mountain Man previewed the tour with a secret show at the Townhouse in LA (9/3). They played five songs off Feist's upcoming LP Metals, including the lead track "How Come You Never Go There." You can watch videos of these songs, with all tour dates, below...