Mountain Man in a Greenpoint Church (photo by Erez Avissar) 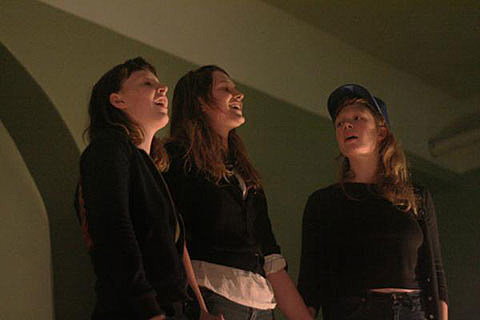 Mountain Man (Molly Erin Sarle, Alexandra Sauser-Monnig and Amelia Randall Meath), already with record contracts overseas have signed with Partisan Records in the US! Their album Made The Harbor will be released by the Brooklyn-based label that is also home to Deer Tick, on July 20th.

As far as shows, the May 19th one at Mercury Lounge is sold out, but they've added another. That makes their total upcoming US shows two, and both are in NYC. The new one is opening for Junip at Knitting Factory on June 9th. Tickets are on sale. Junip is the band of José González, Elias Araya & Tobias Winterkorn, and they're also playing Bowery Ballroom while they're here (but with a different TBA opener). All Mtn Man dates with the new album tracklist and some videos below...