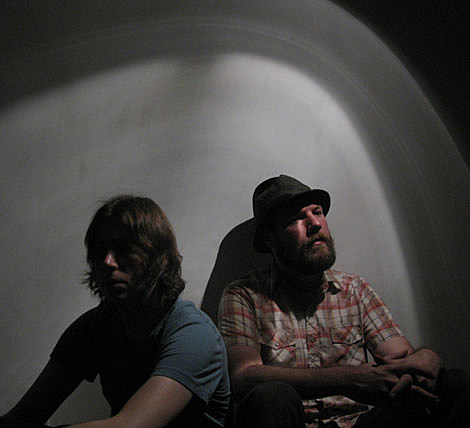 John Zorn's shrine to experimentalism, The Stone, will host the Record Release party for Choral, the new record by Mountains, on Feb 26th at 10PM. The decidedly ambient and minimalistic Choral is out now on Thrill Jockey, and you can stream the whole thing at their site (click the individual songs). Thursday's outing is one of a pair that the band currently has lined up in their hometown of NYC, the second of which is a FREE show at Chelsea Market on March 9th!

Mountains is Brendon Anderegg and Koen Holtkamp, friends since their middle school days.... The group's third album, Choral, (their first self-titled release and second album Sewn were both on Apestaartje), is the culmination of their work to date and a balanced mix of the first two efforts. Mountains is often compared to artists such as Brian Eno and Fennesz citing their extended melodies and their unique broad guitar work. Mountains seamlessly blend pastoral electronic sounds with both field recordings and a plethora of acoustic instruments... Recorded by the duo entirely in the winter and spring of 2008 at home in Brooklyn, Choral is largely live and performed in real time, with only a few overdubs to create a more "choral" effect...Guiding us through sonic peaks and valleys, the band takes us on a journey through their realm of experimentation, occasionally crossing over into psychedelic and kosmiche (Harmonia, Cluster, Popol Vuh) territory.

The show at The Stone is one of the final shows in a month curated by Shannon Fields of Stars Like Fleas. The day after that curated month comes to an end (March 1), Stars Like Fleas will play Union Pool with Echoes Still Singing Limbs and Monotract. Four days after THAT (Mar 5), Stars Like Fleas are playing with Twi The Humble Feather, La Strada, and Frances at MHOW.