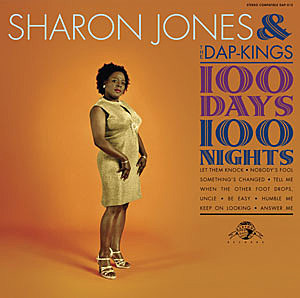 Sharon Jones herself just completed filming the role of "Lila" in the upcoming film The Great Debaters. Denzel Washington both directed and stars in the film along with Forest Whitaker. Sharon plays a "Juke Joint" singer named "Lila" and has both a speaking part and is featured singing the Lucille Bogan classic "That's what my Baby Likes". She also recorded additional songs which will be included in the official soundtrack to the film. The movie is a Weinstein Co release and is due out on Christmas Day. Denzel Washington hand-picked Sharon from a quickly made DVDo of her live performances and applauded her on-screen talents.

Tickets for Sharon's next NYC show at the Apollo Theater (October 6) go on sale Friday. Her last NYC show was a free one at Castle Clinton. New song on MySpace. All tour dates below....