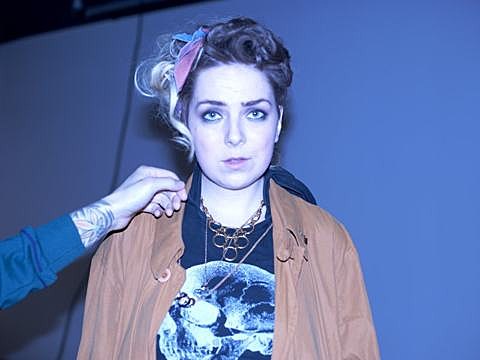 Next up was Mozart's Sister, the solo project from Caila Thompson-Hannant of Think About Life (and Shapes and Sizes before that) which brings and electro twist to R&B style pop. Anyone who has seen her other bands live before knows she has an amazing set of pipes and a magnetic stage presence to match, which is more than enough to carry the minimal live show which included a guy on bass and a second singer (last night was the debut of this configuration). It was also enough to make up for the sound issues that were clearly frustrating the hell out of Thompson-Hannant, who cracked jokes through her annoyance. - [BV @ M for Montreal 2012]

Caila released Hello, her second EP as Mozart's Sister, last month. Synthpop and R&B are filtered through Thompson-Hannant's idiosyncratic style and you can stream the whole EP below. She's also putting the finishing touches on her debut album but will bring Mozart's Sister to NYC at the end of the month for two shows: April 26 at Cake Shop and April 27 at Cameo with Joywave and Cascading Slopes (Jacob from The Drums' other project). Dates are below too.