"Are we happy or sad if exit through the gift shop wins? #obeygiant" - Shepard Fairey 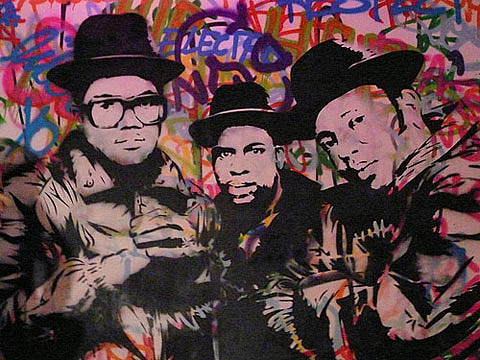 "Earlier [in January] I noted that Banksy had finally spoken about the artist Thierry Guetta (aka Mr. Brainwash) profiled in his now Oscar nominated film Exit Through the Gift Shop . Still, suspicions run fairly rampant that he either doesn't exist or is merely the latest prank creation by Banksy. Guetta has now given sworn statements that the artwork is his own, as he's the subject of a copyright lawsuit initiated by photographer Glen E. Friedman. The two Run DMC images above should make that fairly obvious (as well as several others after the jump).

Friedman is arguing that Guetta used, without credit or permission, his iconic photo of Run DMC on invitations, artworks, merchandise and promotional materials. The Hollywood Reporter broke this story, connected some of the dots between many of the people involved, and then suggested it's basically the same situation as the Associated Press vs. Shepard Fairey case surrounding the Obama 'Hope' image. It's not, and for number of reasons which I'll get to in a second..." [Boing Boing]

It should be noted that Glen E. Friedman has worked with Shepard Fairey (and Banksy according to articles), so who knows what's real and what isn't.

That said, the real human who is known as Mr. Brainwash made an appearance Saturday at the Independent Spirit Awards where "Exit" won best documentary, and he will be at the Oscars, but the LA Times says...

The big question as of Sunday morning remained whether Banksy himself would show up to the Oscars. On the red carpet before the [Independent Spirit Awards], Guetta engaged in some playfulness. "We'll see. This is like the movie: Can we explain the movie? No. Can we know that the movie is real or not? No. Can we know if he's going to show up? I don't know."

But then he also said that, indeed, he and the reclusive street artist could have a plan. "Maybe, maybe not. I don't know," he said, offering a coy smile.

Banksy is at least in LA.

By the way, Exit Through the Gift Shop is on Netflix on-demand.

The Washington Post talked to Thierry on the ISA red carpet too. That interview and other videos (including Exit Through The Pet Shop), below....