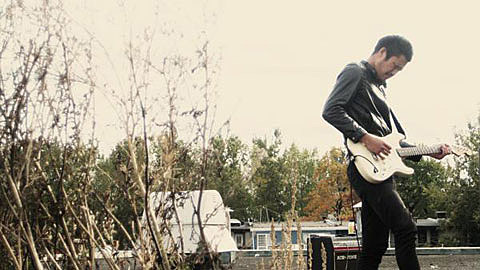 We're 1700 miles and two weeks away from the eye of the storm, but you can feel the SXSW hurricane forming from here. People have begun talking about breakfast tacos and the clubs are filling with bands from Canada, Scandinavia and the UK. Even moreso than normal.  There is too much going on. Decisions, decisions. Let's get into it.

Dirty Beaches play two shows this week: a headlining slot at Glasslands on Thursday (3/3) and then opening for Dum Dum Girls at Bowery Ballroom on Friday (3/4). The pseudonym of Montreal artist Alex Zhang Hungtai, Dirty Beaches sound like a band invented by David Lynch (or maybe Jim Jarmusch), like a half-remembered dream infected by an oldies station playing on a vintage transistor radio. It also kind of sounds like Suicide. Dirty Beaches' forthcoming album, Badlands (out March 29 and pictured above), is at times pretty, twangy and vaguely sinister. He's definitely got a vision to what he's doing. Check out "Lord Knows Best" at the top of this post for a sample.

The Glasslands show also has Austinites (and TWII faves) YellowFever on the bill, as are Widowspeak whose new single is out now on Captured Tracks (the a-side is downloadable above), and Ela Orleans. Plus, Dee Dee of Dum Dum Girls is DJing. This should be a good night.

As should Dum Dum Girls' show on Friday. Their new EP, He Gets Me High, came out on Sub Pop this week and you can download the title track at the top of this post. I loved DDGs' debut, but I think these new tracks are a definite improvement: a little tougher, the production's better and the songs are solid. And I dig the Smiths cover as well.

Former Dum Dum Girls drummer Frankie Rose is also on the bill, and she has dropped The Outs from her name... and the band. This show will mark the debut of her new group and perhaps a new sound? We shall see. Frankie is promising mostly new songs for this one and I'm curious as to what Frankie Rose Mark 2 will be like.

Rounding out the Bowery line-up are MINKS. Tickets are still available.

Esben and the Witch 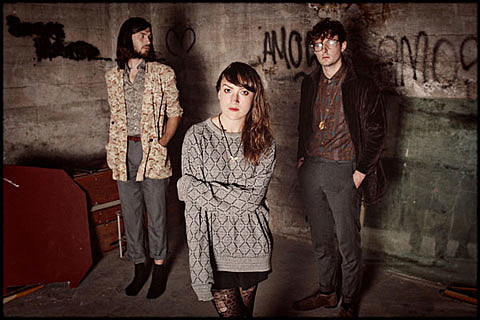 Also here this week are UK neogoths Esben & the Witch who play The Bell House on Friday (3/4) and then Mercury Lounge on Saturday (3/5). While I'm not crazy about their debut album, Violet Cries, which meanders a bit and generally takes too long to get going, I do recommend going to see them live. Guitarist Daniel Copeman rivals The Edge or Kevin Shields for the Most Effects Pedals award and the sounds he creates with them is genuinely mesmerising. He is also a whirlwind onstage. They are so much more compelling live, and worth giving a shot even if the record does nothing for you.

Opening the Mercury Lounge show is Wise Blood who has gotten a lot of love from Pitchfork, Altered Zones, GvB, etc. The alter-ego of Chris Laufman, Wise Blood is firmly in the low fi sample-based collage world. Some of it is pretty interesting for sure  -- check out a track at the top of this post --  but I'm always a bit dubious about seeing this kind of stuff live. Maybe he'll pull it off. Maybe he'll be the next How to Dress Well. How was he last night at Glasslands with Young Magic? Wise Blood will also be at SXSW. 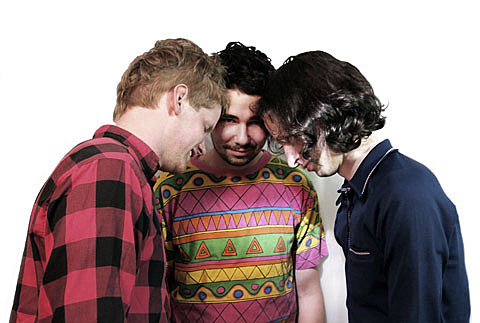 Representing Canada this week are Duzheknew and Cousins who play Bruar Falls on Sunday (3/6) and Death by Audio on Monday (3/7). Both bands hail from Halifax, Nova Scotia -- a town that hasn't had much of a scene (from what I can tell) since its '90s heyday of Sloan, Eric's Trip, Jale and Thrush Hermit. Duzheknew, from the tracks I've heard (like the one at the top of this post), sound somewhere between Wolf Parade (vocally), early Talking Heads and their hometown indie elder statesman. Cousins are a little more straight-up garage rock. Both sound pretty good. 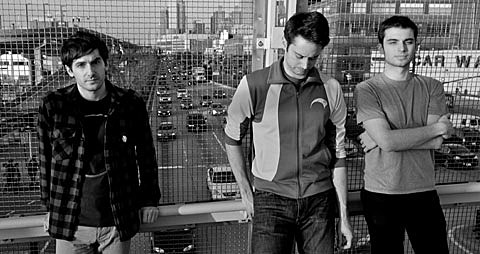 And now onto some local action. Mr. Dream's debut album, Trash Hit, was released this week and will certainly appeal to those with a fondness for early '90s indie rock, be it Nirvana, The Pixies, Jesus Lizard, etc. Which is to say it's loud, it rocks, there is some yelling and snarling... but it's also got hooks,  no shortage of tunes, and badass flinty basslines all over the place. You don't have to remember the early days of Late Night with Conan O'Brien to dig Mr. Dream. As far as I'm concerned this kind of stuff is timeless. You can download "Crimes" at the top of this post and stream the entire album via a widget below.

Mr Dream celebrate Trash Hit's release this Friday (3/4) at Glasslands, with Sleepies and Fort Lean (making their debut) along for the ride. I also hear Derek from Sleigh Bells will be performing as well, but not sure exactly in what capacity. Mr. Dream will tour with Sleigh Bells in April. 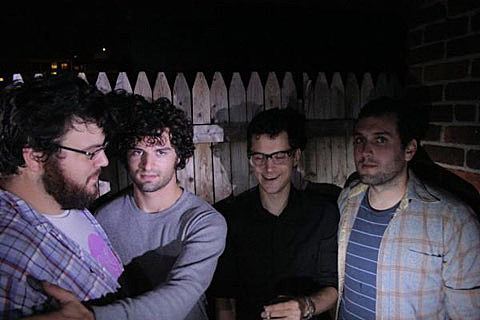 Another Record Release show is happening Friday night, this time at Cake Shop where Shark? celebrate the birth of their new 7" single "Kreegah." It's too bad Shark? and Mr. Dream couldn't have coordinated their parties together as Shark?'s straight-up, super-catchy indie rock would have made a great opening act. You can stream both sides of the single below. Personally, I'm partial to the b-side, "You Don't Love Me (Anymore)." Both songs will be on the band's debut album, True Waste, which was produced by Pere Ubu bassist Tony Maimone and should be out sometime soon?

Shark? hit the road next week, touring with the Sundelles on their way down to SXSW. Sundelles also have a show coming up at Glasslands with Cloud Nothing and Craft Spells. All tour dates are below.

And that is basically it for this week. Expect an equally-lengthy TWII next week. A few more day-by-day picks below:

Tennis, La Sera, and Holiday Shores team up for their first of two NYC shows together, tonight at Bowery Ballroom. They then play The Bell House on Thursday (3/3).

Norway's Heroes & Zeroes play Pianos tonight before heading to Alaska to play a string of gigs in Alaska, believe it or not. Tonight's show is an eclectic bill to say the least, with with French psycho noiserockers Headwar and Koonda Holaa adding to the strangeness. 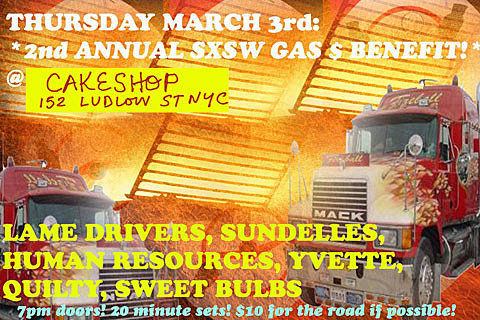 Second annual SXSW Gas Money Benefit is happening at Cake Shop with Lame Drivers, Sundelles, Sweet Bulbs, Human Resources and Yvette. 20 minute sets, all proceeds split equally amongst the bands. $10 and you're encouraged to bring road snacks for the band.

Smith Westerns play tonight at Mercury Lounge and if you don't have tickets...it's sold out. So's their show at Knitting Factory on Saturday (3/5).

Downtown Records is celebrating its fifth anniversary with a party at Webster Hall. Art Brut are playing, as are A-Trak, White Denim, Lissy Trullie, The Suzan.

The Downtown Records birthday party continues, this time uptown at Terminal 5 with Miike Snow, Major Lazer, Santigold, DJ Mehdi and So Me.

Or you could check out The Beets at Bruar Falls. 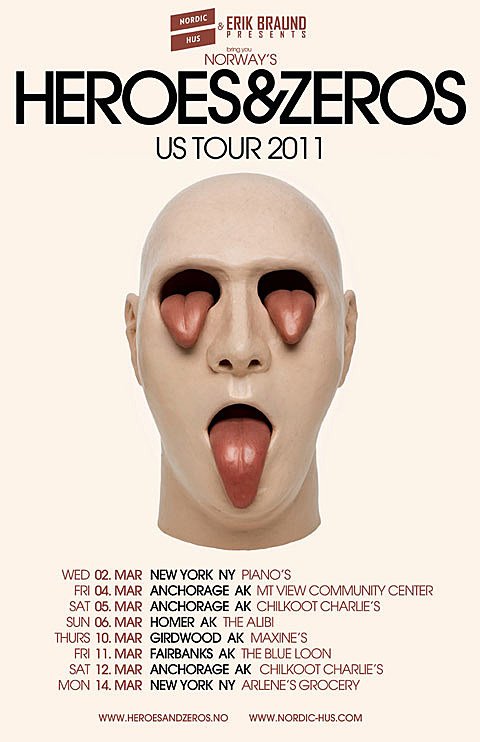 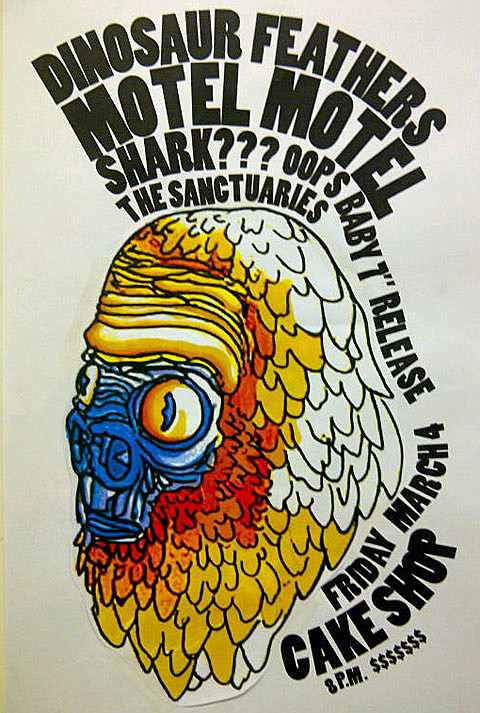 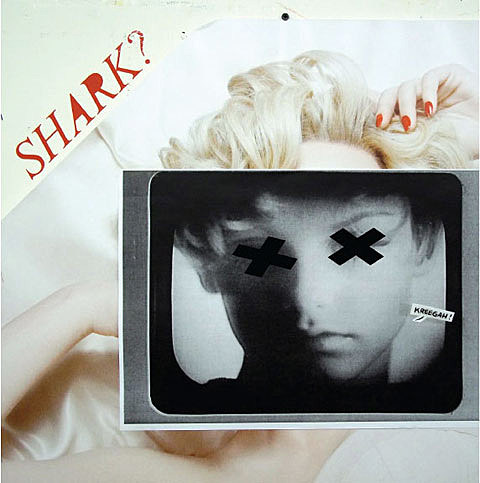