"I felt weird wearing a Mr. Lif shirt when Mr. Lif came on stage. I left as soon as the encore ended. I didn't wanna be #thatguy. #nogroupie" -greenspam

Edan and Mr Lif at Knitting Factory on Tuesday (via & via) 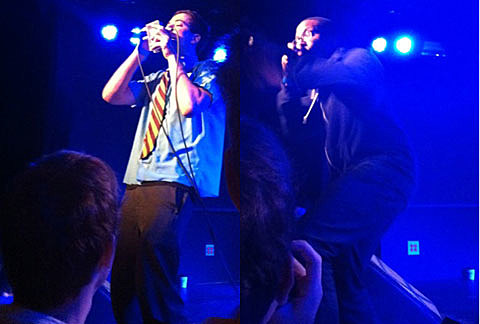 " In his finale set, Edan did it accapella, spitting a, what seemed like, infinite rhyming masterpiece without missing a beat or taking a breath. He brings a level of intellectualism to his lyricism and it shows with his fan base, many of who remained after the show ended in small clusters to discuss the performance." [DD172]

Mr. Lif also made an unannounced appearance at Tuesday's Edan show (8/24) at Knitting Factory which doubled as a screening for Edan's film, 'Echo Party'.

And another Edan Brooklyn show has been announced. This time he'll appear as part of a "Bowling for Beats" event at Brooklyn Bowl on 9/26 which will be co-headlined by Pete Rock and Prince Paul, with other sets from J-Zone, and J57 (Brown Bag All-Stars), and Psycho Les (of the Beatnuts). Tickets should be on sale soon.

And while we're "Bowling for Beats", why not get "Lyrics To Go", as DJ Evil Dee, Mr. Walt, the X Factor Boogie Blind, and New Beatminerz will spin at a Labor Day party at Brooklyn Bowl on September 5. Tickets are on sale.

Questlove will spin at Brooklyn Bowl every Thursday in September. On 8/31, he and his crew The Roots will be the focus of a listening party for their upcoming LP Wake Up! with John Legend. The event is free, but the upcoming Roots/John Legend live show at Terminal 5 on 9/23 is NOT. Tickets are on sale Monday (8/30) at noon.

Video of Edan at Knitting Factory is below...